Beşiktaş passes round as group leaders 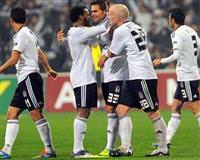 Last night's goals scored by Fernandes, Mustafa Pektemek and Edu sealed the deal for Turkey's representatives in UEFA Europa League who will be moving on to the last 32 as leaders in their group and top of the line for the pairing draw.
The game did not start out in Beşiktaş's favor however with Stoke scoring the first goal of the game in the 29th minute. Fuller's strike from outside the penalty field hit Egemen and then went into the goalpost, with Rüştü unable to do anything to stop it. In fact, the first half concluded with visitors Stoke in the lead.
Beşiktaş started off faster in the second half, and bringing in Mustafa Pektemek to replace Holosko seemed to benefit. Mustafa Pektemek worked well with Almeida and attempted to score from every angle, however none would fruition to a goal.
In the 59th minute, Fernandes sent an excellent pass to Almeida who was then brought down by Upson. The referee proceeded to issue Beşiktaş a penalty and Upson a red card. Fernandes brought the goalkeeper to the opposite corner in a shot that brought Beşiktaş an equalizer.
In the 74th minute, Mustafa Pektemek's excellent header secured Beşiktaş the lead at 2-1. In the 82nd minute Edu, who came into the game to substitute for Almeida, sent an unbelievable rocket of a shot from the far corner of the penalty field which brought the score up to 3-1.
Last night's results brought Beşiktaş up to 12 points and the top spot in Group E. Stoke City follows in second place with 11 points. The Maccabi Tel Aviv and Dinamo Kiev's game ended in a 3-3 draw, which secured seven points for Dinamo Kiev and two points for Maccabi Tel Aviv, which has finished the group in last place.
Group E
Standings P W D L F A Pts
1 Beşiktaş* 6 4 0 2 13 7 12
2 Stoke City* 6 3 2 1 10 7 11
-------------------------
3 Dynamo Kiev 6 1 4 1 7 7 7
4 Maccabi Tel Aviv 6 0 2 4 8 17 2