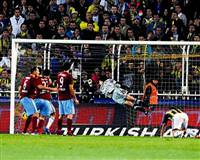 Bonding with fans in Kadıköy, last night Fenerbahçe beat Trabzonspor in a game they considered to be a revenge of sorts.

This was to be a big game. The atmosphere of the stadium prior to the game's start was worthy of the two mega teams. It was visitors Trabzonspor however who had a chance to score first. In the very first minute of the game, a header by both Burak and Gökhan was a difficult save for Volkan who sent the ball to a corner. Celutska, however was unable to transform the corner shot into a score. In the 9th minute, Trabzonspor's shattered Fenerbahce's hopes when Giray intercepted a ball brought down by Yobo which was headed to an expectant Semih situated right in front of the goal post.

In the 19th minute, Burak attempted another header, which was once again saved by Volkan. However it was the 23rd minute that sealed the hosts' fate. Captain Alex centered in a corner ball, which went past Selçuk to Mehmet Topuz, who secured the early lead for Fenerbahçe. With excitement at a peak, Trabzonspor made an attempt with Giray, whose header went over the goal post.

The second half kicked off with a position for Burak. Serkan's center pass from the right fell directly in front of Burak, however with the defense closing in on him, he responded with a poor shot. The second fate-determining moment of the game came in the 55th minute. Playing in Zokora's place, Aykut, who already had a yellow card, was thrown out of the game by referee Cüneyt Çakır for a foul made on Gökhan.

TEMPO DROPS IN FINAL 20
After Trabzonspor's red card, positions began to flow for Fenerbahçe. In the 61st minute, Mehmet would have been right in front of the goal post, had Giray not prevented the critical position. Immediately after, Stoch came in from the left diagonal; however Tolga took the stage in saving his shot. Shorty after, Trabzonspor's first position came in the 64th minute. Burak shot an excellent strike from the right diagonal, and this time it was Volkan who saved the shot from becoming a goal. In the 67th minute, the ball made its way to Cech, who hit hard, despite it being a right kick. The ball scraped the goal post on its way out. At this point in the game, both technical directors' tempo seemed to drop. Fenerbahce's attempts by Alex in the 75th minute, Cristian in the 80th minute and Stoch coupled by Alex in the 87th minute did not reap results.

Trabzonspor brought his luck
Having scored his last goal with Fenerbahçe on August 23rd, 2010, Mehmet Topuz broke the streak against Trabzonspor last night. Scoring with a right foot kick from a center pass by Alex, Topuz sent the ball straight over Tolga's reach. Topuz gave a special thanks to Alex and later left his position in the game to Dia in the 64th minute.