The Turkey Cup goes to Turkuvaz 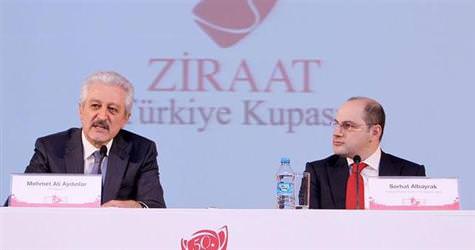 Turkuvaz Media Group has acquired the broadcasting rights for the Ziraat Turkey Cup. Matches will be shown on A Haber and ATV.

THERE WILL BE EXCITEMENT AGAIN
Turkuvaz Executive Board Deputy Chairman Serhat Albayrak expressed that they will be taking on responsibility during this problematic period for Turkey's football. "We will do all that we can and not just with broadcasts, but as the entire media group, with our journalism and reporting in order to ensure that the same excitement and spirit is brought back to Turkey's football, ensuring its presence in both Turkey and throughout the world. We will be working to regain Turkey's love of football."
Following the agreement signing yesterday, the fixtures for the 2011-2012 season Ziraat Turkey Cup's third stage were drawn yesterday, The games will be played singular on January 10th, 11th and 12th.
The Turkey Cup pairings are as follows:
Galatasaray - Adana Demirspor
Beşiktaş - Gaziantep Büyükşehir Belediyespor
Gaziosmanpaşaspor - Medical Park Antalyaspor
Trabzonspor - İstanbul Güngörenspor
Boluspor - Gençlerbirliği
Bursaspor - Şanlıurfaspor
Bugsaşspor - Manisaspor
Çaykur Rizespor - Gaziantepspor
Fenerbahçe - Konya Torku Şekerspor
Eyüpspor - Eskişehirspor
Akhisar Belediyespor - Kayserispor
Ankaragücü - Kasımpaşa
Kardemir Karabükspor - Ünyespor
Adanaspor - İstanbul Büyükşehir Belediyespor
Samsunspor - Orduspor
Mersin İdmanyurdu - Sivasspor.