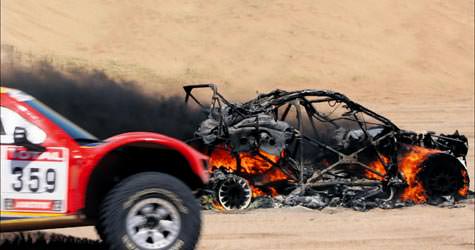 Argentine motorcycle rider Jorge Martinez Boero was killed when he crashed early in the first stage of the Dakar Rally in Argentina on Sunday.

Boero, 38, was nearing the end of a special section among dunes on the Atlantic coast on his Beta RR450 on the stage from Mar del Plata in Buenos Aires province to Santa Rosa in La Pampa in the centre of the country, organisers said.

The son of a former national motor racing champion and taking part in his second Dakar rally, he suffered serious injuries to his thorax and cardiac arrest.

"The rider suffered a cardiac arrest following his fall and was attended five minutes after the accident by the medical staff, who reached the place of the incident by helicopter," said a statement on the official race website (www.dakar.com).

"Despite their best efforts, the doctors were unable to resuscitate the pilot, who died while he was being taken to hospital."

The rally, which moved from Africa to South America for security reasons four years ago, is notoriously dangerous and has claimed several lives in the past.

"However experienced the racers may be, they know the Dakar is high risk and that unfortunately this (kind of accident) can happen. Any error can cost you your life," Ignacio Crotto, race coordinator for the province of Buenos Aires, told TN television news.

Previously raced in Argentina and Chile, this year's rally has been extended to include Peru and covers a distance of nearly 9,000 km, finishing in Lima on Jan. 15.