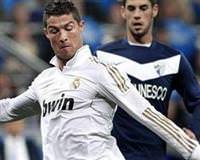 Holders Real Madrid scored three times in 10 minutes at the Bernabeu on Tuesday to beat Malaga 3-2 in their King's Cup last 16 first leg, sparked by a furious dressing down from Jose Mourinho.

Real coach Mourinho threw caution to the wind with a triple substitution after delivering a withering halftime team talk with his side trailing 2-0, calling them "rubbish."

Two of his replacements, Sami Khedira and Karim Benzema, and Gonzalo Higuain led the fightback, netting between the 68th and 78th minutes to turn the tie and spare Real's blushes.

"I told the players at halftime I would have changed all 11 if I could have," Mourinho told reporters.

"I had considered making changes before the break but I don't like to do this. I asked them to clean up the rubbish of the first half."

Up to that point, the underdogs had held sway in the Cup with three surprise results earlier in the evening.

Third tier Mirandes, who knocked out Villarreal in the previous round, took a 2-0 lead over Racing Santander while another Segunda B side, Albacete, drew 0-0 with Athletic Bilbao.

Qatari-owned Malaga had been thrashed 4-0 and 7-0 in their last two meetings with Real, but took the lead through Sergio Sanchez and Martin Demichelis, both scoring with headers from Santi Cazorla corners.

Mourinho threw on Germany midfielders Khedira and Mesut Ozil and France striker Benzema for the second half to try and shake his side out of their lethargy, and the former barged his way through to start the fightback.

Argentina's Higuain pounced on a wayward backpass to level two minutes later and Benzema slotted the third after a wonderful backheel from Higuain as Malaga desperately tried to keep the floodgates closed.

"We gave them a goal at a crucial moment," Malaga coach Manuel Pellegrini said referring to Sanchez's underhit backpass for the equaliser.

"We should have come away with a better result. We had the chances to finish them off."

Pablo Infante was the hero for Mirandes, scoring after 32 minutes and laying on the second for Mikel Martins just after the restart, leaving La Liga's lowest scoring team Racing with a tough task in the second leg.

Alcorcon, who famously dumped city neighbours Real out of the Cup while in the Segunda B two years ago, surprised Levante with Borja Perez and Nagore twice giving them the lead.

Last season's losing finalists Barcelona are at home to Osasuna on Wednesday. The second legs will be played next week.