Mevlüt Erdinç in demand by England 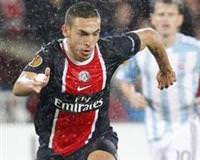 According to news from the English press, Everton Manager David Moyes wants to bring on a striker during the January transfer period and has set his site on Mevlüt Erdinç. The only obstacle posed between Mevlüt and the island is the seven million euro fee the French club demands for the transfer of their forward. The British press states that the transfer is now dependent on whether or not the fee for the player will be lowered by the French team.
Last Update: Jan 07, 2012 6:28 pm
RELATED TOPICS