Platini: Turkey gets my vote for 2020 Euros 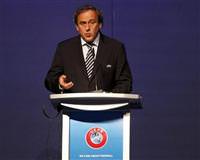 In a speech to delegates at the opening of the UEFA Congress, Erdoğan said: "I would like to repeat the request to host the European Championship in Istanbul in 2020." UEFA President Platini responded to Erdoğan's announcement by stating, "Turkey had a strong bid in 2016 and I think they will be even stronger in 2020. Now the only small issue I have in respect to this is that in 2020 Istanbul is also a candidate for the Olympics so if they have the Olympics and the Euros it's maybe a bit of a handful," Platini told reporters after UEFA's congress.

"Honestly, if Istanbul already has the Olympics before then I won't vote for Turkey because it is impossible to have the Olympic Games and the Euros in the same month in the same city. That's my position," Platini said.

When reminded that individuals from other teams besides Fenerbahçe are also being charged with match-fixing, Platini stated, "If they didn't do anything wrong, then they have no reason to be concerned. We are not saying anything in regards to Turkish football in general. We greatly respect Turkish football. They have great teams, players and fans. We are not taking any action against Turkish football. We simply did not allow one Turkish team to compete in the Champions League. Instead, we accepted the team that came in second."