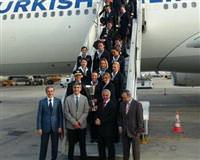 The heart of European basketball is to beat in Istanbul this weekend. The final four of the Turkish Airlines Euroleague play in the semifinals tonight. The winners will then face off on Sunday at 21:00. Games will be played at the Sinan Erdem Sports Center and security will be on high alert.

The finals for the Turkish Airlines Euroleague, Europe's biggest basketball organization on a club basis, begin tonight in Istanbul. The final four play today at the Sinan Erdem Spor Salonu, with CSKA Moscow vs., Panathinaikos and Olympiakos vs. Barcelona Regal. The winners from the semifinals will then face off on Sunday at 21:00 to determine the victors.

In the first game of the finals, the popular favorite is slated to be CSKA Moscow. The evening's match, which will kick off at 21:00 has Olympiakos and Barcelona Regal battling it out for a spot in the finals.

The highest level of security measures will be in place throughout the final tournament.
Security forces have taken a series of special precautionary measures to ensure tension does not escalate between fans of Panathinaikos and Olympiakos, both Greek teams. Accordingly, if fans are involved in any form of violence, they will be detained immediately and deported the next day.