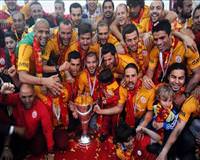 Galatasaray won the Turkish league title for the 18th time after a 0-0 draw at arch-rivals Fenerbahçe and home fans clashed with police after Saturday's game. Sunday, however saw vibrant celebrations at Galatasaray’s Türk Telekom Arena.

In a highly-charged derby that Fenerbahçe needed to win to retain the championship, Galatasaray hung on against a more attack-minded home side as red cards reduced both sides to 10 men in the second half. The former UEFA Cup winners are now level on 18 championships with Fenerbahçe. Galatasaray ended the four-way title playoffs with 48 points, one ahead of Fenerbahçe. Trabzonspor were third and Beşiktaş fourth.

There was chaos after the match as Fenerbahçe fans invaded the pitch and clashed with police. Spectators also ripped up seats and threw them on to the playing surface. Galatasaray fans did not attend the match under a federation ruling. Outside the stadium police fired tear gas and water cannon as they clashed again with Fenerbahçe supporters. There were contrasting scenes elsewhere in the city at Taksim Square where Galatasaray fans danced, lit flares and waved flags in the team's red and yellow colours.

Sunday evening, celebrations for Galatasaray's victory of the Spor Toto Super League's 2011-2012 season were held at the Türk Telekom Arena, which was filled with the team's loyal fans. During the evening's celebrations, hundreds of torches were lit up by fans prior to the team's entrance in to the stadium. Although the team had been handed the championship cup Saturday night after the victory in Fenerbahçe's Şükrü Saraçoğlu Stadium, the lights were turned off after the game and it took Prime Minister Erdoğan to ensure the cup ceremony happened. Sunday's celebrations were a different story however, as fans waved torches of their team's famous yellow and red and performers Altay and Gripin took the stage. Both Altay and Gripin performed songs dedicated to Galatasaray's victory. Galatasaray fans and players celebrated in glory the first championship victory at the Türk Telekom Arena.

Coach Fatih Terim, in his third spell in charge, has led the club to the title one year after taking over from caretaker Bulent Under. Necati Ates and Selcuk Inan topped the goal charts for Galatasaray this season with 13 apiece while Swede Johan Elmander and Brazilian Felipe Melo also reached double figures. The action on the pitch in Turkey has been reduced to something of a sideshow this season with media attention focused on charges of match-fixing against 93 players and officials around the country including Fenerbahçe chairman Aziz Yildirim.

Paying tribute to their jailed chairman, Fenerbahçe fans with placards formed a huge picture of Yildirim in one of the stands before Saturday's match. The match-fixing investigations led to the resignation of the Turkish Football Federation (TFF) chairman, changes in soccer regulations and volatility in the shares of clubs amid media speculation over possible sanctions. The disciplinary committee this week announced bans of between one and three years on 10 players and officials but no action was taken against any club.