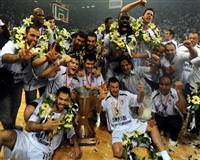 Beşiktaş Milangaz successfully beat Anadolu Efes by 80-76 in the Beko Basketball League finals which came to a close on June 11th to secure their first victory in 37 years.

Beşiktaş Milangaz claimed the title for the 2011-2012 Beko Basketball League play-off final series by coming out the victors by 80-76 against Anadolu Efes on Monday night.

With the close call win, Beşiktaş Milangaz sealed the deal in the sixth game of the finals played at Istanbul's Abdi İpekçi Sport Halls, by winning the series 4-2 against Anadolu Efes and claiming the title for the first time in 37 years.

'We have had a historical season'
Ergin Ataman head coach for Beşiktaş Milangaz says they have left behind a historical season. Ataman goes on to explain that they had hoped to beat Anadolu Efes in the game played before this last one, however it just wasn't fate. "It turns out our destiny was for this final game. It is a great pride to be bringing home the third cup to our club's museum.
When one journalist asked, "What are your plans for next season?" Ataman responded by stating, "I will do what Beşiktaş fans want. I will be taking on the position of Beşiktaş football team technical director! We will be making our decisions regarding Quaresma and Almeida. If the club president approves then we will go ahead and make our assessments. That is the only proposal that has been made to me thus far and that was by our fans over twitter. But why not? I could do that too," Ataman joked.