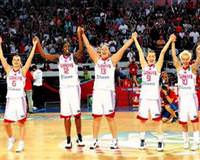 Turkey’s national women’s team beat Argentina by 72-58 last night in the FIBA Olympic Qualifying Tournament, securing their spot in the London Olympics while also becoming the second women’s national team to qualify for the Olympics in over five decades.

The policies embraced by the AK Party over the past ten years have contributed significantly to the success of the nation's female athletes. The policies put in place regarding female education coupled by the incentives granted to sports branches has resulted in bringing forth the nation's women athletes, which are now achieving even further success in international competitions than their male counterparts.

Last month, the Turkish women's volleyball team became the first Turkish team to qualify for the Olympics in 52 years. After last night's win against Argentina in the first game of the quarterfinals. Turkey's national women's basketball team will be joining their compatriots to compete in this summer's London Olympics.

Turkey had already successfully won both of their matches in the group stage of the FIBA Olympic Qualifying Tournament which tipped off in Ankara on Monday.