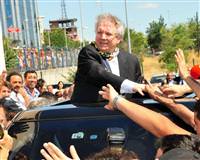 A court sentenced Fenerbahçe chairman Aziz Yildirim to more than six years in jail on Monday in a match-fixing trial which has caused turmoil in Turkey but released him from custody pending an appeals court ruling.

Yildirim was among several 93 defendants, including club executives and players, convicted in a case closely watched by European football's ruling body UEFA. All sights are now set on the question of whether or not UEFA will issue its own slew of charges.

"They are trying to use Fenerbahçe to clean the dirt in the matches. I say now as I did at the start: even if we are on the gallows, our last word is Fenerbahçe," Yildirim said before the verdict was announced.The court sentenced Yildirim to three years and nine months for match-fixing and two years and six months for forming an illegal organization but then released him taking into account the year he has already spent in jail on remand.

He was also fined 1.3 million lira ($720,000) and was banned from club management and watching matches. Other Fenerbahçe executives were also convicted, as were a former coach and executive from rival Istanbul club Besiktas.

Yildirim's lawyer said he would launch an appeal.

Former Giresunspor chairman Olgun Peker was sentenced to two years jail for crimes including forming a criminal gang. Like Yildirim and the two other defendants who were still held in custody until Monday's hearing, he was set free pending appeal.

The Sivasspor chairman and former coach Bulent Uygun were also convicted along with players Gokcek Vederson, Ibrahim Akin and Mehmet Yildiz who received sentences of less than one year.

Fenerbahçe were barred from the Champions League last season and there had been media speculation the club could be stripped of the domestic title and relegated to a lower league.

WHAT DOES THIS RULING MEAN FOR TURKEY'S FOOTBALL AND WILL IT BE REFLECTED IN A FUTURE DECISION BY UEFA?

The following are a series of assessments made by Turkish football aficionados:

"With this ruling, the Federation is now in a difficult position. That is because the ruling made by Turkey's Football Federation and the court are completely opposite. Both administrators and players have been charged for match-fixing. The ruling that 'it wasn't reflected on the field' has been completely debunked. Therefore, the Turkish Football Federation may have an extremely difficult time explaining this to UEFA. After this ruling, there is a heavier possibility that UEFA may lean towards issuing a penalty on Fenerbahçe.

RULING WILL NOT ALTER FENERBAHÇE IN UEFA

This one-year match-fixing trial has now come to a close and the rulings have been made. Fenerbahçe Chairman Aziz Yıldırım may have been released but he also was sentenced to prison time. According to Ersan Şen, attorney to Fenerbahçe administrator İlhan Ekşioğlu doesn't think the ruling will affect Fenerbahçe's European aspirations."

"THE TIME HE SPENT INSIDE FULFILLED THE SENTENCE HE RECEIVED"

"Fenerbahçe fans have been waiting for this ruling to release the chairman for a long time now. In our legal system, the sentences issued are not always carried out to the full. In rulings made up until the year 2005, only one third of the actual sentence issued was served. Two-thirds of people sentenced were released on probation. This changed in 2005. In sentences issued today, those charged are subject to spend two-thirds of the time in prison. The remaining time is usually spent on probation. I believe what happened here, is that the time Aziz Yıldırım has already spent in prison may account for the time he was sentenced to serve. Therefore, along with the issuing of a prison sentence, he was also issued his release. One needs to add together the sentences he received and in the end it will be sufficient if he serves a third of that combined time."

"It seems the court has found Aziz Yıldırım to be guilty. The Court of Appeals may approve or break this ruling. It was right for him to be released, as there was no reason he should remain in custody during the appeals process. We have seen similar examples numerous times; there is nothing strange about this situation."