Turkey’s ‘Fairies of the Hoop’ move on to the quarterfinals 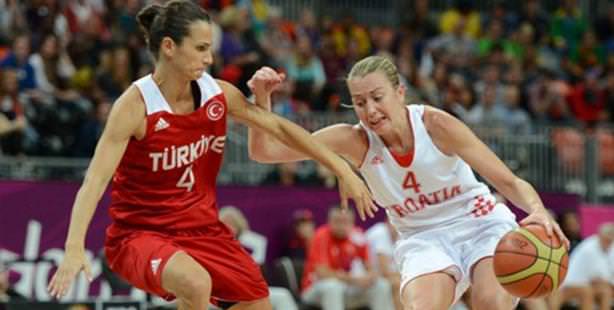 Turkey turned out a victory against Croatia in the Olympic women's basketball Group A on Sunday, and secured their spot in the quarterfinals. The ‘Sultans of the Net’ however have had to depart early losing out to the United States in a game that unfortunately determined their fate.

Turkey's women's basketball team beat Croatia by 70-65 on Sunday to secure their second spot in Group A behind the United States. Out of Group A, the United States, Turkey, China and Czech Republic will go through to the next round. The teams that qualified for the quarterfinals in Group B are France, Australia, Russia and Canada.

The quarterfinals tips off tomorrow with the following pairings:


The U.S. women's volleyball team cruised to victory in three straight sets against Turkey's 'Sultans of the Net' on Sunday, closing out the preliminary round of the London Olympics tournament undefeated at the top of Pool B.

Turkey sails out of the competition alongside Britain, Algeria and Serbia after China and Korea went to five sets earlier in the day, giving them both enough points to earn a spot in the knockout round of the quarter-finals.

Turkey's 'Sultans of the Net' played a blinding first set before losing 27-25, and forcing the United States to shore up their defense and raise their game.

"Obviously in the first set Turkey had a lot of success," U.S. coach Hugh McCutcheon told Reuters. "Once we blocked our defense and our reception grooved in a little bit that made things easier."

The world number one team's Destinee Hooker blasted 17 spikes out of 38 attempts, delivered 19 points and had some strong help up front at the net from Foluke Akinradewo to win the last two sets 25-16 and 25-19.

Russia will play Brazil in the quarter-finals followed by Japan against China, Italy against Korea and the United States against Dominican Republic on Tuesday.