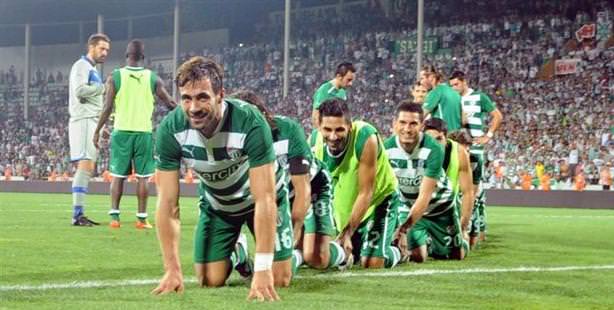 Despite starting off strong at the start of the game, Bursaspor fell behind Twente. However, with two goals from Batalla coupled by one from Sestak, hosts Bursaspor managed to beat Twente and open the door to securing a spot in the Bursa ‘crocodiles’ return away game against the Dutch reps.

Last night's hosts Bursaspor came out the victors against Holland's 73 million-Euro team and strong contenders in the Europa League, Twente. With the overwhelming support of 25,000 fans and in a match that passed like a storm, the hosts and their high tempo destroyed their guests on the field.

From the start, Bursaspor players Batalla, Pinto, Ozan made it obvious with a series of organized attacks that they planned to walk away with a significant goal difference. Bursaspor generously wasted three clear positions in just the first 16 minutes alone. With missed positions by Pinto and Sestak right in front of the goal post, it was inevitable that eventually Twente would score which they did with Chadli in the 31st minute.

Bursaspor did not break down however and just minutes later, in the 39th minute of the game, Ozan İpek's left to center pass set up the perfect goal for Batalla, managing to renew a sense of hope for Bursaspor.

Bursaspor came in strong for the second half as well and a score by Sestak, assisted by Batalla only proved that point, bringing the score to 2-1. Batalla proved himself to be the most valuable player of yesterday's game with a header in the 82nd minute that sealed the deal for the hosts bringing them up 3-1. Batalla was MVP last night with two goals and one assist, while Ozan also shined with two assists. With Thursday night's score, Bursaspor has secured a strong advantage going into the return game against Twente in Holland. Meanwhile, the tribune's display of support was in a single word, magnificent.

HOW CAN BURSA MAKE IT PAST THIS ROUND?

In order for Bursa to make it to the group stage, they need to make sure they do not lose by a two-goal difference in the August 30th return game in Holland. Any draw, or single or double score difference win (with the exception of 3-1) will guarantee Turkey's reps into the next round of the Europa League. If the return game ends in a 3-1 win in Twente's favor, then the game will go into overtime and possibly penalty shots.

This is a translation of an article originally written by Serkan Yetişmişoğlu.