Galatasaray played well yet Manchester United were the victors 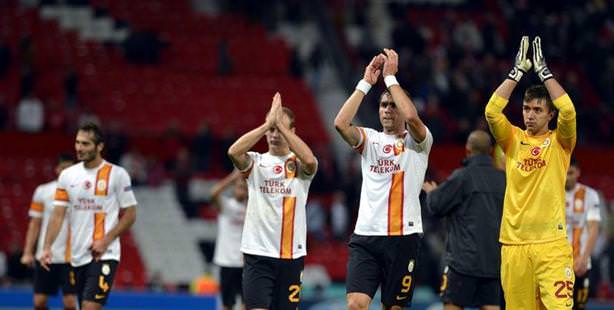 Carrick’s seventh minute score that slipped past Muslera was the sole goal of the night in Old Trafford for the first game in the Champions League group stage pitting Galatasaray against Manchester United.

Turkey's champions Galatasaray had three strong chances to score last night by Nordin Amrabat, Hamit Altintop and Selcuk Inan, and had one sure penalty claim turned down in just the second minute. Manchester United was given a penalty shot in the 53rd minute, yet Nani's spot-kick was saved low by Fernando Muslera.

Explaining that some of his players were excited and this game will teach them some lessons, Galatasaray Technical Director Fatih Terim says the return leg will have different results.
"I am sad we lost. We can't say the results were positive; however we were able to reflect Galatasaray's character on the field. Umut's injury held us back. We could have suffered even more goals against, but we also could have won. The penalty at the two-minute mark was a sure thing. Referees at this level should have called it. However, we have further to go. We will continue to work hard. The excitement of this being the first Champions League game took over for some of the players.
To be honest, I even told myself, don't go on the field, just sit down, but then I just had to get out there. Our players will learn a lesson from this game and the return leg played in the Arena will be much different," stated Terim.

Manchester United Coach Alex Ferguson also commented on the match: "Three points in the opening game are very important, especially when you look at what happened to us last season. In the first half we gave the ball away too often and they counter-attacked really well. In the second half, we were much more solid at the back, and all the chances fell to us. It was a good opening game, they were very confident in their possession, and in missing the chances we did in the second half we kept ourselves on the edge," Ferguson, who celebrated his 100th Champions League win, told
reporters.