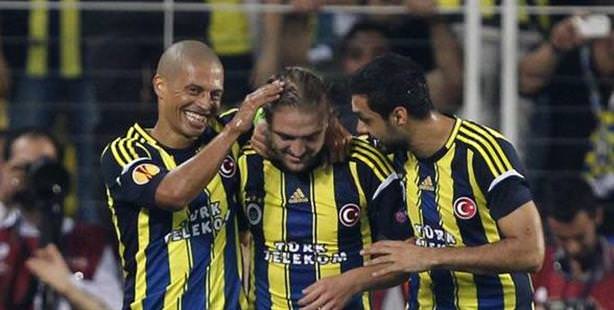 Fenerbahçe suffered a great disappointment at home last night after coming so close to a win in the Group C opener for the Europa League. Goals from Caner and Alex brought last night’s hosts up 2-0; however a player change by Coach Aykut Kocaman switched up the balance, giving Marseille a chance to get back on their feet.

The French team, which has scored five of their eight goals in the French league in the 75th minute or later, scored their first goal last night in the 82nd minute by Valbuena and in the 94+ minute with Ayew. The cheering crowds in the stands quickly turned silent as fans watched Fenerbahçe lose the chance to win their Europa League opener, which ended in a 2-2 draw.

Unable to beat Marseille last night, Fenerbahçe also ceased to put an end to a curse that has lasted 27 years. Ever since September 18th, 1985, when Fenerbahçe beat Bordeaux in France by 3-2, Fenerbahçe has failed to win against a French team in the eight games played up until now, losing seven and drawing just once. The team nearly put an end to that streak by taking a 2-0 lead to Marseille only to lose the victory in the 94th minute of the game well into overtime.

WHAT DID ALEX SAY?

Captain Alex, who was substituted after Fenerbahçe took on a 2-0 lead, was saddened by the final results. Commenting on the game, Alex said, "The first vesof both games were quite similar. From the 35th minute on we began losing the ball. This got worse towards the end of the second half and we lost our dominance." When reminded of the goal he scored, Alex stated, "I don't care about what I contribute personally, what matters to me is what we are able to do as a team and how well we are able to spread out onto the field. We need to work more."

THE GOALS OF THE GAME

In the 28th minute, an assist by Hasan Ali Kaldırım was shot by Caner Erkin on the diagonal, bringing the score up to 1-0. In the 57th minute, Mehmet Topuz came in from the right. In a center pass between stoppers, it was expert Alex who came in to score an excellent header which brought the lead up to 2-0. In the 83rd minute, Marseille came in with an attack by Andre Ayew, setting up the goal for Mathieu Valbuena, in a play not a single Fenerbahçe player could stop. The final score of the game came in the 90 +4th minute in overtime when Andre Ayew sent Fenerbahçe into great shock.

THE STARS OF THE GAME

Marseille's Valbuena was the best player on the field, acting like a dynamo on the field and failing to tire… He was present in every single one of the team's attacks. In the end he managed to score the goal he was chasing after. Also on the French team, Andre Ayew's game kept the team afloat. In the end, literally, it was his last minute goal that secured the team a draw and the one point. On Fenerbahçe, Caner Erkin was applauded not only for his goal but also for his overall game on the field.

This is a translation of an article originally written by Volkan Demir.