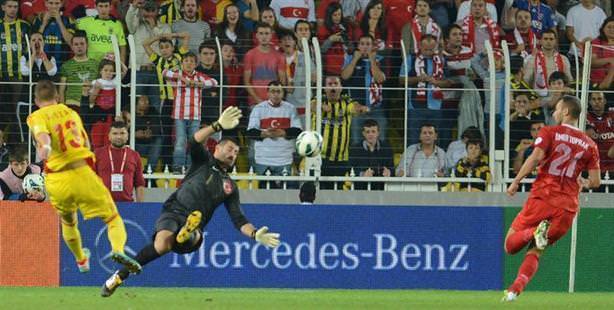 The Turkish National Football team suffered an unfortunate loss at home to Romania in a crucial Group D qualifier round for the 2014 UEFA World Cup.

Turkey hosted Romania, the current Group D leaders at the Şükrü Saracoğlu Stadium in what was supposed to be a competition for the second spot in the group behind the Dutch. However, with Romanian's third consecutive win, it seems they are now competing for the top spot in the group against Holland, while Turkey's chance to place waver.

Turkey started off strong in last night's game, overseen by British referee Howard Web. However, a misguided decision by Turkish goalkeeper Volkan Demirel which had him dashing out of his area to block a ball brought in by Gheorghe Grozav who scored from nearly 30 meters.

Turkey has now dropped into fourth place with three points, their sole win against Estonia, and follows Hungary at six points and Romania and Holland, both with nine points each. The Turkish National team faces off against Hungary next in Budapest on October 16th.

Last night's line-ups were as follows: