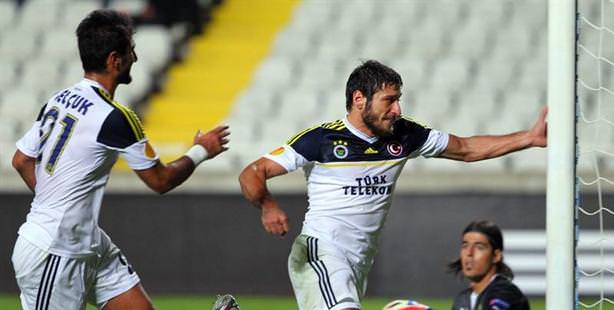 Cyprus and Turkey temporarily put aside their decades-long conflict on Thursday to focus on soccer as Fenerbahçe clinched a 1-0 win over AEL Limassol for the Europa League in Nicosia.

Fenerbahçe's Egemen Korkmaz scored with a header in the 72nd minute for the Turkish side after repeated assaults by Cypriot champions AEL had been repulsed by goalkeeper Volkan Demirel.
Hundreds of police were on alert in the ethnically split capital of Cyprus after the sides had been drawn together in Group C. Cyprus was split in 1974 and regular contact between Greek and Turkish Cypriots is limited and fixtures between teams from Cyprus and Turkey, which do not have diplomatic relations, are even more rare.

Just over 1,000 Turkish Cypriot Fenerbahçe fans crossed a United Nations-patrolled 'green line' for the game to the Greek Cypriot south. Strictly segregated from the 7,000 Greek Cypriot AEL fans, Turkish Cypriots arrived by bus escorted by police, who took over security of the 20,000 capacity GSP stadium at midday on Thursday.

Strict security was in place for the game. Mindful of ethnic sensitivities, political slogans and respective national flags were banned. AEL stewards forced a small number of fans to lower Greek flags, even though a Turkish Cypriot flag was raised by a spectator when Fenerbahçe scored. But in the end, it was soccer that won the day. "Football is peace and friendship," read one banner held by Fenerbahçe spectators.

Greek Cypriot champions AEL, who parted company with Coach Pambos Christodoulou on Monday even though last season he guided them to their first league title in 44 years, are making their debut in the group stages of a European competition. Christodoulou was replaced by Jorge Costa this week.
The Cypriots are bottom of the group with one point from two games while Fenerbahçe lead with seven points followed by Marseille and Mönchengladbach with four points each. Also playing in Group C, Germany's Mönchengladbach beat a visiting Marseille at home by 2-0.

Fenerbahçe returns to the UEFA Europa Cup on November 8th, when they reciprocate the Cypriots' welcome by hosting AEL Limassol in Istanbul.