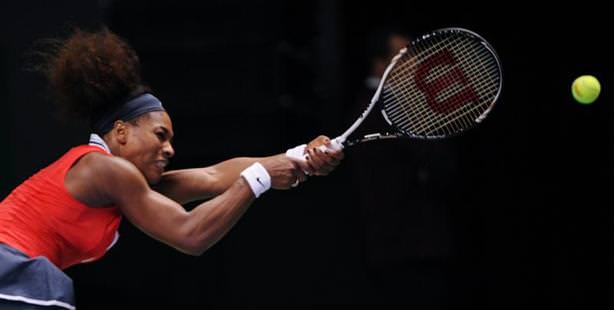 This is the first time U.S. tennis pro Serena Williams is in Istanbul. Gushing about how impressed she is, Williams says that the interest and love expressed by the Turkish public has made her so happy.

In Istanbul in to compete in the TEB-BNP Paribas WTA Championships, America's famous tennis star Serena Williams provided an exclusive interview for SABAH.

Serena's sweet temperament and actions prevailed throughout the interview during which Serena gushed compliments of the Turkish audience. The U.S. tennis pro states, "Honestly, before I came to Istanbul, I was not expecting to see this sort of interest and admiration. Even the staff at the hotel I am staying at are showing me unbelievable attention."

Noting that she finds the Turkish public to be extremely sincere, Serena says, "The tribunes have been incredible. I felt their support from behind me and I have been the one to receive the most support in the games here. This has made me so happy. Hopefully, I will leave here not only with good memories but also with the championship title."

We asked the 15-time Grand Slam winner who she would most want to interview if she was sitting in our seat. Serena responded by saying, "That's a good question. If I were in your seat, I would most want to interview U.S. President Barack Obama," she answered. When asked if she ever considered entering politics after her career in tennis comes to a close, Serena responded, "Definitely, not. Politics are not for me."

My sister couldn't get enough of the shopping

We also asked the tennis-pro what she thought about Istanbul. Explaining that she was tired after playing games back to back for the past three days, Serena said, "Unfortunately I have been playing since I arrived so I haven't been able to truly see Istanbul. When my shopaholic sister Venus came to Istanbul she turned the city upside down. I haven't had that chance yet. However, the Istanbul I have seen so far has been like a dream. Especially the shiny lights at night make this city look like a fairy tale. I wish I had the chance to see more, however our intense game schedule just doesn't allow it. To be honest it is even more beautiful than my sister told me it would be. In fact, she is trying to figure out a way to get back here, because she couldn't get enough of the shopping at the Grand Bazaar," said Serena.

A big fan of fashion

When we asked Serena what she wants to do when she gives up playing tennis, she seemed slightly offended and responded, "I am not considering giving up tennis right now,"

She did go onto explain however that when she does stop playing eventually, she wants to be active in the fashion industry with her sister Venus. "I have a big interest in fashion," states Serena. I also think I am talented in that area. I am also receiving training in fashion. However, that won't be for a long time now," said Serena signaling that she is definitely here to stay in the tennis world.

By the start of the fourth day of the WTA Istanbul opening, Maria Sharapova had won three out of three by beating Samantha Stosur, thereby continuing her chance of becoming the number one player in 2012.


In the game to determine Sharapova's rival in the semi finals, Victoria Azarenka beat Li Na by 2-0. After walking away from the court as a semi-finalist at the close of the one hour and 39 minute game, Belarus' Azarenka had also guaranteed her first place spot in the 2012 WTA.

Yesterday's second game of the day was heart-stopping. Poland's Agnieszka Radwanska beat Italy's Sara Errani by 201 in what was the longest match played in season's-end tournaments at three hours and 29 minutes. Today, Radwanska faces off against Serena Williams for the Semi-finals.

This is a translation of an article originally written by Galip Ercan Öztürk.