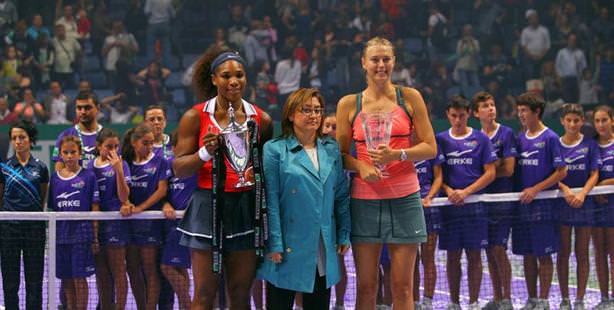 After calling Istanbul, “a fairy tale-like city,” Serena Williams has made it the destination of her WTA Tour victory, having successfully beating Sharapova in 6-4 and 6-3 sets.

Williams claimed the TEB-BNP Paribas WTA Championships final with a two set victory against Russian Maria Sharapova. In front of 16,410 in the stands of the Sinan Erdem Dome, Williams broke Sharapova at 3-2 in the first set with a hard backhand down the line. Sharapova then fought off two break points in the seventh game with big groundstrokes but she could not get enough returns back in play to hurt the American when she was serving. Williams then closed the first set with a kicker serve out wide that Sharapova barely got her racket on. Never looking back, Williams again broke Sharapova to open the second with a stunning backhand crosscourt winner. Sharapova managed to get to deuce for the first time in the eighth game of the set, but Williams responded with a forehand crosscourt winner and a service winner out wide to hold 5-3. She then broke Sharapova to win with an outright return of serve winner concluding the one hour and 29 minute game.

Turkey's ministers come out for the game…

A number of the state's leaders were also present for the TEB-BNP Paribas WTA Championships final. Amongst those in the stands were Minister of Family and Social Policy Fatma Şahin, Minister of Transportation Binali Yıldırım and Istanbul Mayor Kadir Topbaş. Serena was handed her awards by Fatma Şahin.

Russian's take the title in doubles

Winning her seventh WTA tournament title final 2012, Serena Williams said, "It feels great to have achieved my dream… Now that I can be honest, I really wanted to win," Williams said. "I wanted it so bad, but I didn't want to say it. ... It was really important for me to end the year with this title in particular…The Turkish fans here are so amazing, so nice and so supportive – I've never seen so many signs with my name on them. I can't even explain how that makes me feel.""

Istanbul was the best…

Despite losing in the final, Maria Sharapova expressed that she pleased with her performance and with the tournament in general. "I've said it throughout the tournament, that this has been the best WTA Championships I've been a part of. I only got to play a couple of matches last year, but this year, especially as the week went on, the excitement from the people from the second they call your name onto the court and you're walking out, it's pretty incredible as an athlete to have that sort of positive energy without even hitting a ball. The appreciation you have from people's understanding and respect of what you do is really unique. We're all really happy – and we have another year here too!"