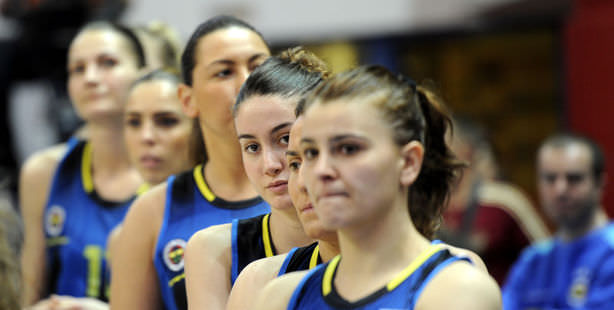 Fenerbahçe have become the runners-up in Europe’s top-level women’s basketball competition, Euroleague Women, after losing the final on Sunday by 82-56 to Russian hosts UMMC Ekaterinburg.

Turkey's champions Fenerbahçe were unable to recover from a poor start in yesterday's Euroleague Women's final against UMMC Ekaterinburg, their Russian rivals and hosts to the final-eight for European basketball's top-level women's competition.

Disappointed with the 82-56 loss against Ekaterinburg in the title match, Fenerbahçe has had to suffice for second place as runners up in the FIBA Euroleague Women's which concluded on Sunday.
Fenerbahçe had a rough start yesterday; when they scored their first shot in the 03:10 minute, they were already down 8-2. Going into the second quarter, Fenerbahçe was down by 26-11. When the team failed to acquire the anticipated results from Cappie Pondexter in offense, Fenerbahçe went into half-time down by 39-24.

Their Russian rivals managed to maintain the score difference in the second half and won the game by 82-56. Ivana Matovic and Angel McCoughtry were the sole players in Fenerbahçe with a significant scoring power in yesterday's game raking in 22 points each. After scoring 70 points in the four games which led them to the finals, last night Pondexter was only able to shoot a single point to much discern.

While disappointed by the loss of the championship title, Fenerbahçe Chairman Aziz Yıldırım congratulated his team's players on their success by entering the locker room applauding, in an attempt to increase morale. Yıldırım consoled each player as they had difficulty holding back their tears. Later, he was joined by the team's management who applauded the girls once again on their success, however this time it was Yıldırım who was visibly overtaken by emotions.

Next season, Fenerbahçe will be the hosts of the Final Eight in Euroleague Women which will be held in Istanbul.