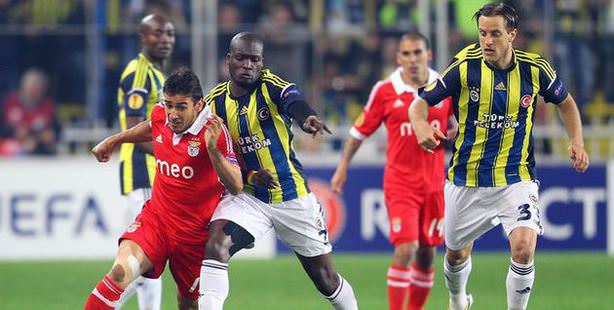 Egemen Korkmaz's second-half header earned Fenerbahçe a 1-0 win in the first leg of their Europa League semi-final against Benfica and eased the tears of team mate Cristian on Thursday.

Fenerbahçe hit the goalpost three times Thursday night including Cristian's penalty which thudded against the post on the stroke of halftime, reducing the Brazilian to tears. Luckily for the midfielder, Korkmaz made the breakthrough after 72 minutes with a header that also clipped the frame of the goal before landing narrowly over the line. It proved enough to put Fenerbahçe tantalizingly close to their first European final although Benfica will be formidable opponents in next week's return in Lisbon.

Roared on by a raucous crowd of 43,000 in the Şükrü Saracoğlu Stadium Fenerbahçe played at a high tempo from the start as Benfica struggled to settle into their stride. Moussa Sow, who will miss the second leg after receiving a yellow card, struck the crossbar in a surefire attempt; however Fenerbahçe successfully maintained the pressure. When Ola John clipped the trailing leg of Gökhan Gönül just before halftime Fenerbahçe were awarded a penalty but Cristian failed to convert it.

When former Liverpool striker Dirk Kuyt also hit the post in the second half it looked like it may be a frustrating night for the home side but Korkmaz raised the roof when he finally broke the deadlock after a poor defensive header in the 72nd minute.

Benfica's best chance came when Nicolas Gaitan curled a shot against the outside of the post but Fenerbahçe held on for the victory despite some anxious moments.

As well as striker Webo, stupidly booked for kicking the ball away, midfielder Mehmet Topal will also miss the second leg after receiving a yellow card. On the Benfica side, Ola John who tripped up Gökhan Gönül for a penalty call will also miss the return leg due to the booking.

Fenerbahçe Coach Aykut Kocaman said his team would fight "until the last drop of their blood" in Portugal. "It will be a very difficult game for us there, but we definitely have acquired the 51 percent chance of reaching the final," Kocaman said. Goalkeeper Volkan Demirel was more convincing, "We will win the cup," he told reporters after the game.

"Normally we are a team that delivers when we find opportunities, but tonight we couldn't do that," Benfica coach Jorge Jesus told reporters. "But the result is not too bad, we will remain hopeful until the last minute of the second leg. We will be much better in Lisbon."

In the other semifinal playing for a spot in UEFA Europa League final, Chelsea beat Basel by 2-1.
The second leg matches take place on May 2 and the final will be played in Amsterdam on May 15.