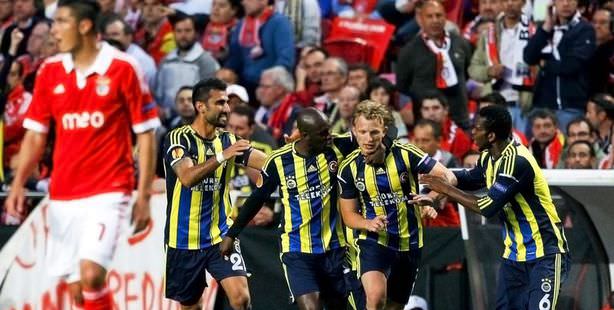 In an exciting, tight and highly energized game, hosts Benfica managed to outscore Fenerbahçe by 3-1 last night and will now be moving on to face Chelsea in the UEFA Europa League final in Amsterdam on May 15.

Paraguay striker Oscar Cardozo's well-taken double fired Benfica into a Europa League final with Chelsea after they beat Fenerbahçe 3-1 in Lisbon to win their semi-final 3-2 on aggregate. Fenerbahçe came into last night's match with a 1-0 win in the first leg from an away goal by Dirk Kuyt; however it took last night's hosts just nine minutes to cancel out Fenerbahçe's aggregate lead when Nicolas Gaitan clipped in Lima's low cross.

Nicolas Gaitan, who was rested for the first leg came in and leveled the aggregate early. The hosts were then stunned when in the 23rd minute, Ezequiel Garay was called on for handling the ball which struck his arm and Fenerbahçe was served a penalty shot. Fenerbahçe had struggled to stem the early onslaught but got an unexpected gift when Kuyt coolly converted from the penalty spot. Benfica were back in front 10 minutes before the break when a quickly taken free kick found Cardozo and the Paraguayan turned and fired past Volkan Demirel.

The game was held up for a few minutes early in the second half when Fenerbahçe defender Gokhan Gönül needed lengthy treatment after he was caught in the face accidentally by a flailing leg from Gaitan. Gönül was carried off on a stretcher. Cardozo put Benfica in the driving seat when Lusiao's shot fell into his path and the striker fired into the corner, bringing the score up to 3-1 in the 66th minute.

Cardozo's fine left-foot finish restored Benfica's lead on 35 minutes in a breathless first half and his decisive strike came on 66 with another crisp low shot from inside the area. Since the Europa League was rebranded in 2009/10, only Atletico Madrid striker Radamel Falcao, with 30, has scored more goals in the competition than Cardozo who has 19.

Chelsea, last season's Champions League winners, beat FC Basel 3-1 at Stamford Bridge on Thursday to ease through 5-2. The final is in Amsterdam on May 15 when Benfica will have the chance to win their first European trophy since lifting the second of their successive European Cups in 1962.