“Racism has no place in Turkey” 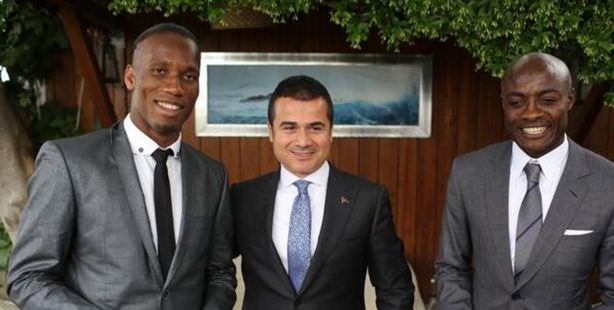 Sports Minister Kılıç brought two star players from arch-rival teams together to discuss the recent surfacing of racial gestures by fans in the Fenerbahçe-Galatasaray derby, the foreign player quota and Turkey’s 2020 Olympic bid.

Youth and Sports Minister Suat Kılıç met with Galatasaray's Ivory Coast national team striker Didier Drogba and Fenerbahçe forward Pierre Webo who hails from Cameroon on Monday to discuss the recently surfaced racial debate as a result of certain actions by fans caught on footage at the Fenerbahçe-Galatasaray derby held the week prior.

Minister Kılıç stated that there is no point in targeting clubs for the mistakes of individuals. In response to footage capturing Fenerbahçe fans wielding bananas, Drogba responded by stating, "This was not the first time an act of racism has taken place in the world, it happens. I am really happy in Turkey and I know it was just an individual act." The Galatasaray star then pointed out that it was Fenerbahçe's Webo that went on to score the two winning goals in the derby which ended 2-1 to the host's victory. Minister Kılıç commended Galatasaray on their responsible response to the incident and said that there sorts of acts do not suit Istanbul or Turkey. "Racism just won't work in Turkey. Our beliefs and culture are against it. You have given a great lesson with your level-headed response which did not blame a team for their fans' actions. This should be an example to all football supporters," stated Kılıç who also mentioned how saddening it was that a Fenerbahçe fan was stabbed to death by Galatasaray supporters after the heated game on May 12.

The foreign player quota should be lifted…

During the meeting the issue of foreign player quotas on Turkish teams was also discussed. "The quality of Turkey's league is improving; however there shouldn't be a foreign player limit. It should be like England where there is a minimum of eight domestic players. If you didn't limit the number of foreign players then the quality of the league would improve," said Drogba.

When Kılıç responded by stating, "But we are unable to find enough players for the national team," Webo answered, "I am also in favor of there not being restrictions. As you saw in the European Champions League, there are no limitations." Drogba then commented, "You need time for the national team. If Ferguson came could he even last a year?"

"Turkey is truly a growing, improving and modern country. There is a city that is now a candidate to host the 2020 Olympics. Thank goodness I came to Turkey. I have found myself here. A lot of responsibility falls on the shoulders of footballers in these sorts of incidents. If players were to deliver certain positive messages to the public then no problems would remain," Drogba.

Kılıç stated that he would like both players to be ambassadors of Turkey in its bid for the 2020 Olympics to which Drogba and Webo said they would be happy to take on the role.