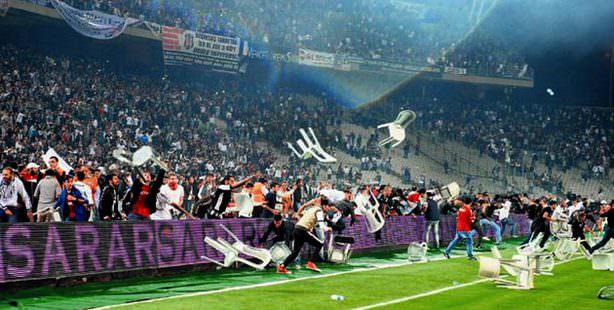 Just minutes before the final whistle was to blow in last night’s derby game between hosts Beşiktaş and Galatasaray, home team fans stormed the pitch in the hundreds resulting in referee Aydınus suspending the game, which had reigning champions Galatasaray in a 2-1 lead. A group of Beşiktaş fans, who were also infamous for their involvement in the vandalism and violence of the Gezi Park protests, entered the field in an attempt to attack police forces and rival team players.

Last night's highly energized first derby of the season, held between hosts and league leaders Beşiktaş and reigning champions Galatasaray was cut short as hundreds of fans stormed the field in the 90 +2 minute in injured time. Referee Firat Aydınus suspended the match, which at 2-1 was in the visiting team's favor. The Istanbul Atatürk Olympic Stadium was filled with solely Beşiktaş fans last night, a total record-breaking 76,000 to be exact.

Beşiktaş took the initial lead in the 18th minute with a goal by Hugo Almeida who was aided by Serdar Kurtuluş. Galatasaray's star Ivory Coast player Didier Drogba, who suffered a dislocated shoulder in last week's game against Real Madrid, scored not only the equalizer for visitors Galatasaray but also their second goal which handed them the lead. Drogba was assisted by Galatasaray's newest star transfer Portuguese player Bruma in the 59th minute and then by Burak Yılmaz just ten minutes later.

Just as Galatasaray were getting ready to celebrate the much-needed victory, as the team had surprisingly only won a single sole game out of four played in the league and was reeling from a 6-1 loss against Champions League rivals Real Madrid at home, a red card issued by referee Aydınus on Felipe Melo appeared to spark throngs of fans invading the field. With just two minutes remaining in injured time, footballers were forced to exit the field as hundreds of fans began to invade it, many wielding plastic chairs. Soon after, referee Fırat Aydınus suspended the game.

Police detained 69 supporters that entered the field last night, which they later released after questioning. The incident took place after Melo was issued a red card for a rough foul on Ramon Motta. Besiktas fans could be seen fighting amongst themselves towards the final minutes of the game, however once Melo held up his Galatasaray uniform as he exited the pitch, suddenly hundreds of fans were seen storming the field. Many were wielding plastic chairs and appeared to be targeting security and police officers. The Turkish Football Federation is expected to issue a 3-0 score to Galatasaray's favor for last night's game. In addition, Beşiktaş will most likely be served a five-game stadium penalty in which they will have to play five home games in another team's stadium. In addition, last night's hosts are expected to be issued an addition penalty of three matches without supporters.

What a shame as yesterday's derby had a spectacular start with a festival held prior to the game. In addition, with 76,127 spectators the game broke a Super League record for the highest attendance in a game ever.