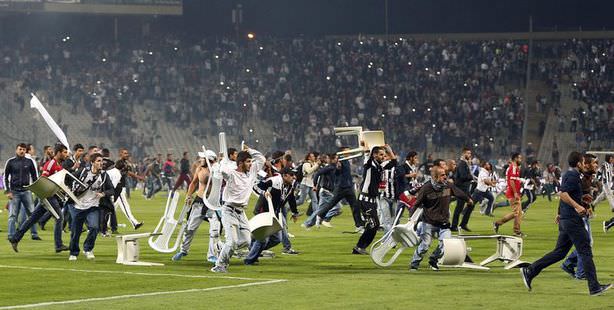 Beşiktaş has been served a four-game closed stadium penalty in response to hundreds of the Istanbul club’s supporters storming the pitch during last Sunday’s derby against Galatasaray. Since then the club’s stocks have dropped 62.4 million TL in value. Club President Orman vows to take the vandals responsible to court.

Beşiktaş has suffered a heavy blow from the aftermath of hundreds of the football club's supporters storming the pitch in stoppage time during a derby game with Galatasaray at the Ataturk Olympic Stadium in Istanbul last Sunday. Since then, the club's shares on the Istanbul Stock Exchange have dropped 62.4 million TL in value. The Professional Football Disciplinary Committee (PFDK) has penalized the club with a four closed game penalty, which means no fans will be allowed in the team's next four home games, scheduled with Rizespor, Karabükspor, Konyaspor and Sivasspor.

Beşiktaş Coach Slaven Bilic, who was sent off the pitch moments before crowds stormed the field, will also have to sit out for three games due to allegedly insulting the referee. Galatasaray's mid-fielder Felipe Melo, whose reaction to being issued a red card, may have incited fans to storm the pitch, has also been handed a two-game suspension.

The PFDK has also issued Beşiktaş a 70,000 TL fine for failing to provide the necessary security and for allowing in more fans than the stadium capacity. Although many are said to have entered without tickets, the 76,000 ticketed Beşiktaş supporters broke an attendance record on Sunday. The PFDK has yet to decide whether to award visiting Galatasaray a 3-0 win or to let the score remain at 2-1 to Galatasaray's favor, where it stood in the 90+2 minute when referee Firat Aydinus called the game.

Beşiktaş Club President Fikret Orman has announced that the club will be filing cases for moral and material damages. Signing on to a first by deciding to file compensation cases against those who stormed the pitch, Beşiktaş has recorded this decision in the club's minute book.

INDEPENDENT CASES ALSO TO BE FILED

Meanwhile, a number of Beşiktaş shareholders and season cardholders are also planning to file independent cases for damages incurred as a result of the unfortunate incident. Those responsible for invading the pitch and wielding chairs and other objects will not only be tried according to the Violence in Sports Law, but they will also be held accountable for the damages they have incurred the club and individuals.

On Friday, police staged simultaneous operations on over 130 addresses and arrested 85 fans of Istanbul's three major clubs for engaging in organized crime. The operation, which was the result of a 16-month investigation, is being carried out by the Istanbul Prosecutor's Office. The detainees, which include Alen Markaryan, the head of the Beşiktaş fan group Çarşı, are being accused of obtaining profit through illicit means, menacing behavior and involvement in organized crime.