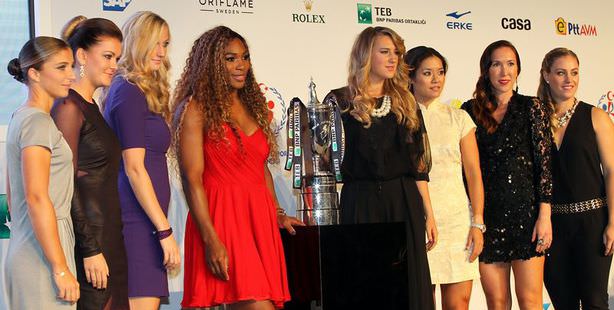 The TEB BNP Paribas WTA Championships kicks off today in Istanbul for the third and final time as the world’s eight top-ranking tennis players will contend for a total six million dollars in prize money. Four top duos will also be competing in the six-day tournament, which is the final competition of the year and the most prestigious tennis event after the Grand Slams.

The TEB PNB Paribas Women's Tennis Association (WTA) Tour Championships kicks off on Tuesday in Istanbul's Sinan Erdem Sports Arena. In singles, the competition pits the world's eight top ranking female players and will have four top duos competing for doubles. Considered to be the most prestigious tennis tournament in the world, second only to the Grand Slams, the TEB PNB Paribas WTA Tour Championships is considered to be the grand finale to the annual tennis season. The world's ranking number one player Serena Williams will have to contend against seven others of the world's greatest female tennis players to keep her title. This is the third and final time Istanbul hosts the WTA Championships, which will distribute a total six million dollars in prize money to the competition winners.

Istanbul hosted the previous two championships in 2011 and 2012. In Istanbul's debut year as host, Czech player Petro Kvitova beat out Victoria Azarenka for the title. Last year, American superstar Serena Williams defeated Russia's Maria Sharapova to claim the victory. Maria Sharapova, who hails from Russia and is currently the world's top third female player has stepped out of this year's WTA due to a right shoulder injury. Nevertheless, the competition will be fierce this year, and defending champion Serena Williams appears to be the favorite to win the title. The 17-time Grand Slam winner beat out Azarenka in September for the U.S. open, however Azarenka, who currently ranks second in world classification, beat out Williams at this year's Australian Open played in January.

TWO GROUPS OF FOUR TO COMPETE

The WTA championship, which will run from Tuesday to Sunday, will have the top eight ranking players competing in two groups of four that were determined at a drawing held October 20.

In the red group, Serena Williams will face off against 2011 winner Petra Kvitova, Agnieszka Radwanska and Angelique Kerber. The white group pits the world's No. 2 Victoria Azarenka against Li Na, Sara Errani and Jankovic.

The group matches, which begin on Tuesday and end on Friday, will have each player go head to head with the other three players in the group. The group matches will begin at 17:00 and three games will be played each day. The top two players in each group will advance to the semifinals on Saturday. The player to come first in each group will be paired with the player to come in second in the opposing group. The winners will then vie for the title in Sunday's final.

The duos will play in semifinals held Saturday and will play a final match to determine the trophy winners on Sunday.

Considered to be one of the most prestigious competitions in women's' tennis, this will be the last TEB BNP Paribas WTA Championships held in Istanbul. Next year, the WTA will be introducing a new format to be held in Singapore.

This year's aim is to break an audience record by hosting over 100,000 fans in the Sinan Erdem Sports Arena. In 2011, the first year Istanbul took on the hosting title, an audience of 70,000 came out to witness the event, marking one of the highest participation rates of any WTA championships. In 2012, the number of tennis-lovers that came out to witness the matches reached 73,072 and the Istanbul WTA became the highest viewed championship in television broadcasts. This year, the organization aims to far surpass previous figures by reeling in a record-breaking audience of 100,000.