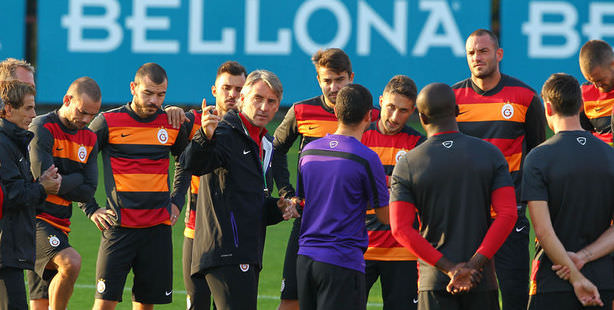 Galatasaray hosts Copenhagen Wednesday night at the Turk Telekom Arena in Istanbul for the group stage in the Champions League. Tonight’s game, the third in Galatasaray’s Champions League campaign this season, kicks off at 21:45 and will be new coach Mancini’s second game leading the Turkish league champions in Europe and his debut in their home stadium.

Galatasaray hosts Copenhagen Wednesday night for the first of two consecutive games against their Group B rivals in the Champions League. The game, which kicks off in the Turk Telekom Arena at 21:45, will be refereed by Macedonian referee Aleksandar Stavrev. This is new coach Roberto Mancini's second game with Galatasaray in the reigning Turkish Super league champions' Champions League campaign in Group B, where they are paired with Real Madrid, Juventus and Copenhagen. Galatasaray suffered a devastating 6-1 defeat to Real Madrid in Istanbul last month. In the game that followed, which was also the experienced Italian coach's debut, Galatasaray drew 2-2 against Juventus on October 2 in Italy.

Galatasaray stands in fourth place with just one point in Group B, which has Real Madrid as the far-away leaders with six points. Juventus follows in second with two points and Copenhagen, although tied with Galatasaray is in third based on average.

Coach Roberto Mancini emphasized that he is not basing his accounts on getting through the group stage and said that more so they will be heading to the field with the intentions of winning every game they play. "Copenhagen is a strong and good team. They are a team with an excellent spread-out defense and catch good positions in counter-attacks." Explaining that he takes each game as they come, Mancini said what matters most is how they play and whether they take the victory.

Asked to comment on the chants at a Turkish league game in support of the team's former technical director and current national team coach Fatih Terim, Mancini said that it was normal for fans to express support for Terim. When asked whether he plans to lead the Italian national team at the end of the season, Mancini stated that he will be concentrating on Galatasaray for the entirety of his three-year contract.

The lack of a limitation on foreign players in European games is set to strengthen Mancini's hand against Copenhagen with his probable starting line-up consisting of Muslera, Eboue, Semih, Chedjou, Riera, Bruma, Selçuk, Melo, Sneijder, Burak (Amrabat) and Drogba.

Tonight's game is the first of two consecutive meetings with Denmark's representatives as they meet again on November 5 for a game hosted by Copenhagen. Galatasaray face off against Real Madrid in Spain on November 27 and on December 10 they host Juventus for their final foray in the Champions League group stage. Also playing tonight in Group B is Real Madrid and Juventus.