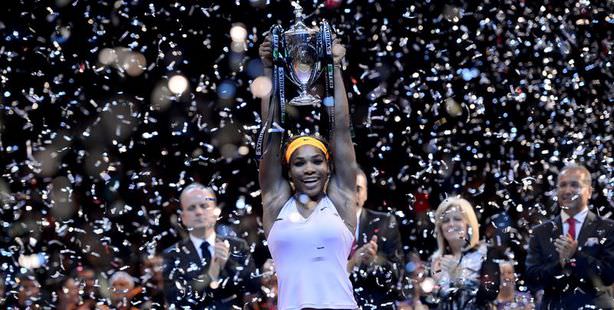 Serena Williams defended her reigning title in the WTA Championships on Sunday in Istanbul beating out China's Li Na by, 2-6, 6-3 and 6-0. This is the fourth TEB PNB Paribas Women's Tennis Association (WTA) Tour Championships title victory for the 32-year-old world number one in women's tennis, Serena Williams, having won the title in 2001, 2009, and 2013. Sunday's victory also marks Williams' 78th career trophy and 11th title of the year.

Going into Sunday's game, both Serena Williams and China's Li Na had won each of every four matches played leading up to the finals. In Sunday's final, Na started out strong finishing the first set in 36 minutes with a 6-2 lead, only to lose out to Williams who came out in force for the second and third sets, which finished 6-3 and 6-0, respectively. In doubles, the Peng Shuai (China) and Hsieh Su-Wei (Taiwan) duo also won the WTA Championships title on Sunday.

Serena Williams thanked the audience when accepting her trophy Sunday and referred to the championships as "unbelievable". She also expressed sadness for the tournament leaving Istanbul next year.

A total 16,457 spectators came out to witness Sunday's finals, which set a new record for attendees at the Sinan Erdem Sports Arena on any single day. Over the past three years, a total audience of 213,879 attended the tournament held in Istanbul.

The WTA Championships ended in Istanbul with the singles and doubles final matches on Sunday. WTA Chairwoman Stacey Allaster, Youth and Sports General Manager Mehmet Baykan and Turkey's Tennis Federation President Osman Tural also attended Sunday's finals and trophy ceremony, which was the last WTA Championships to be held in Istanbul as the tournament moves on to Singapore for 2014 to 2018.