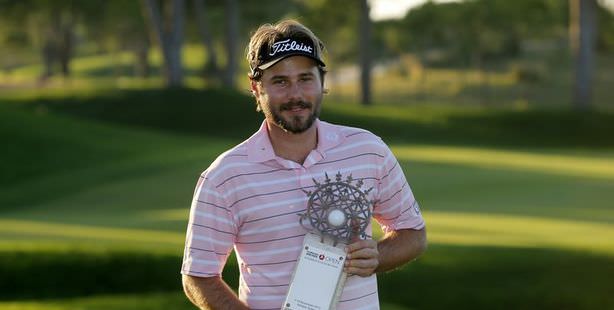 Victor Dubuisson was the winner of the Turkish Airlines Open 2013 on Sunday. Held in Belek, Antalya the French golfer beat out heavyweights Tiger Woods, Justin Rose and Ian Poulter for the title.

On the final day of the Turkish Airlines Open 2013, French golfer Victor Dubuisson reached a 24-shot lead to secure first place at the tournament held at the Montgomerie Maxx Royal course on the Mediterranean coast of Antalya.

The Turkish Airlines Open 2013, which was the third leg of the PGA Europe tour final series and Turkey's first time hosting an official European tour event, ran from November 7 to 10 in the popular tourist destination town of Belek, located in the southern Mediterranean coastal province of Antalya. Including the world's number one golf player, Tiger Woods, 78 international players competed for the coveted title which went to French contender Victor Dubuisson on Sunday. Jamie Donaldson came in second with a 22-shot lead, while Tiger Woods and Justin Rose shared third place with 20-shot leads each.

Turkey's first professional golfer Hamza Sayin, who made his tour debut this week, finished off with a 12-over score, while amateur Turkish golfers, Ediz Kemaloğlu finished with 9-over and Ali Altuntaş with a 23-over score.

The Turkish Airlines Open 2013 Golf Tournament concluded with an awards ceremony held Sunday. The awards ceremony was held at the final stop of the 18-hole course. As Dubuisson made his last shot he celebrated by popping a bottle of champagne as fans fought for autographs from the tournament winner.

Youth and Sports Minister Suat Kılıç, AK Party Deputy Chairman Mevlüt Çavuşoğlu, Turkey's Golf Federation President Ahmet Ağaoğlu and Turkish Airlines (THY) Executive Board Chairman Hamdi Topçu were all present for the ceremony. Sports Minister Kılıç presented champion Dubuisson with the cup and a check for $1,166,600 as he congratulated the French player, while THY Chairman Hamdi Topçu presented Donaldson with the second place award.