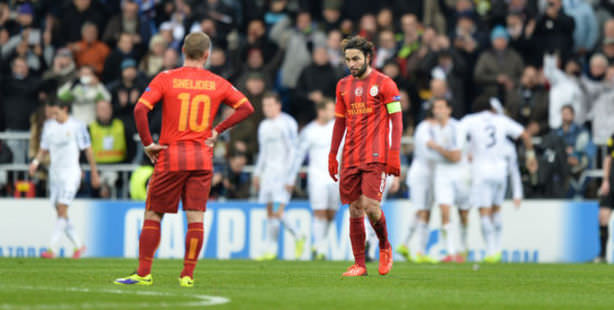 With Wednesday’s 4-1 loss against Real Madrid in Santiago Bernabeu, Galatasaray’s final venture in the qualifying stage of the Champions League against Juventus will be a destiny-determining match.

Galatasaray suffered a 4-1 loss against Real Madrid in the Spaniard's Santiago Bernabeu stadium Wednesday night in their second to last game int eh group stage qualifying round of the Champions League. While Real Madrid have secured their spot at the top of Group B, Juventus is now in second place with six points. Galatasaray is in third and tied at four points with Copenhagen, which is taking up the rear. Galatasaray still has a chance to secure a spot in second place at a fate-testing match against Juventus in Istanbul on December 10. If Galatasaray comes out the victors, they will also nab second place with seven points. In the case of a tie, however, Juventus will be the team to go through to the final 16.

If Copenhagen manages to beat Real Madrd at home, then Galatsaray will still most likely maintain second place due to averages. The worst case situation would be for Galatasaray to lose out to Juventus and for Copenhaen to secure a point against Real Madrid, which would place Galatasaray in fourth place in the group, which would mean the end of their European campaign. If Galatasaray finish in third they will still have the chance of continue on in the UEFA Europa League.

Real Madrid lost a player in just the 26th minute Wednesday night when Sergio Ramos was sent off with a red card for pulling back Umut Bulut. The Spanish hosts quickly recovered when Gareth Bale scored in the 37th minute from a foul call for Felipe Melo. Within a minute, however, Umut Bulut equalized the score with a pass from Didier Drogba.

Umut nearly scored a second goal for the Turkish champions; however it was caught up in an offside call. Just moments later Galatasaray defenders found themselves watching Alvaro Arbeloa's score, which they thought would surely be an offside call.

In the 63rd minute, a pass from Arbeloa was turned into a score for the hosts by Angel di Maria. Galatasaray had a near-score in the 71 minute through a header by Drogba, however Real Madrid's captain and goalkeeper Iker Casillas saved what seemed destined to be a sure shot. In the 81st minute, Isco sealed the deal for Real Madrid and shot the game's final goal to bring the score up to 4-1.