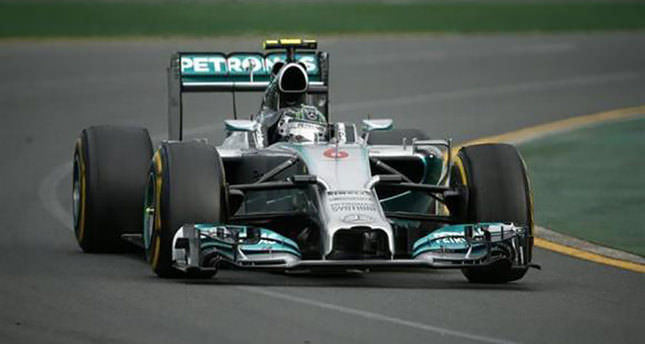 While one German smarted, another celebrated as 28-year-old Rosberg capitalized on a brilliant start from third on the grid, snatching the lead before the first turn and roaring to a 24.5-second victory ahead of Red Bull's Australian Daniel Ricciardo.

On an overcast day at Albert Park, Danish rookie Kevin Magnussen shone with a brilliant third place finish for McLaren, emulating Hamilton's first effort for the British team at the same Grand Prix in 2007.

The result meant all three men on the podium had beaten world champion team mates in a stunning triumph of the underdogs.

Rosberg, tipped to duel with team mate Hamilton for the championship, celebrated his fourth race victory and first since last year's British Grand Prix, when he was also the beneficiary of technical mishaps to Hamilton and Red Bull's Vettel. "Brilliant stuff, what a car you've given me! What a car!" the thrilled German said over the team radio after crossing the line. "The car was just really, really quick today," the German later told reporters, looking forward with relish to the next race in Malaysia in two weeks. "A really good engine, not much problem with fuel consumption. It just all worked perfectly."

The glitches continued as only 14 of the 22 cars finished on a gusty day at the bumpy street circuit which was doused by a brief rain-shower early in the race.

Hamilton, who snatched pole position at the end of a wet qualifying session on Saturday, noticeably lacked power on his start and was called in by his team to retire on the third lap.

Mercedes later clarified his car had suffered a misfiring cylinder. "We will recover from this, it's only a small hiccup.

There's a long way to go still," Hamilton told Sky television. "At the moment I'm not concerned about anything."

Twelfth off the grid, Vettel also struggled at the start and retired only a few laps after Hamilton, complaining of engine performance problems.

Ricciardo, who replaced compatriot Mark Webber at Red Bull after crossing from sister team Toro Rosso, thrilled home fans by taking his maiden podium spot in his first race with his new team and drove with admirable composure after being challenged by Magnussen over the closing laps.

The runner-up finish was a boost for the Milton Keynes-based team, who endured a dismal winter testing in which neither driver was able to complete a race simulation. "Two, three weeks ago, I would have bet pretty much anything we have that we would not be standing up here," the 24-year-old said after becoming the first Australian on the podium at his home Grand Prix since the race has been part of the championship. "First Aussie on the Aussie podium, so really proud."