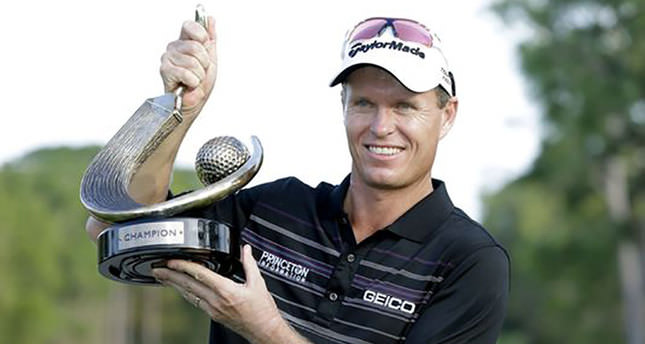 Senden may be noted for his stellar long game, but it was his short game that enabled him to clinch the victory as he pitched in from 70 feet at the 16th and then holed a 20-foot putt at the 17th to break clear of a logjam. He parred the last to shoot a 70 and finish at seven-under-par 277, one ahead of American Kevin Na at the Copperhead course at Innisbrook in Palm Harbor, Florida. "This is the biggest win over here I've ever had," Senden told Golf Channel. "My first PGA Tour win (at the 2006 John Deere Classic) was special but this you've got stronger players in the field and it's a real feather in the cap to know you've beaten a quality field." Six players were within one stroke of the lead late in the final round before Senden emerged for his second PGA Tour victory and his first anywhere since the 2006 Australian Open. The 42-yearold earned $1.026 million and a Masters invitation. Senden, twice a runner-up at Innisbrook, looked destined for another near-miss when he made three bogeys in four holes from the 12th as a combination of nerves and demanding conditions conspired to cause a series of uncharacteristic poor shots.