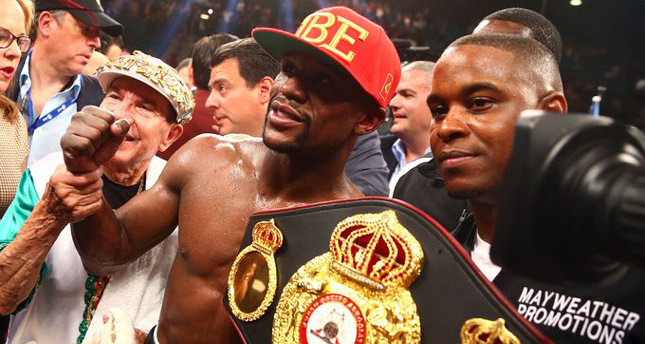 by Associated Press May 04, 2014 12:00 am
LAS VEGAS — Argentina's Marcos Maidana did everything but beat Floyd Mayweather Jr., taking him 12 tough rounds on Saturday before losing a majority decision. Mayweather remained unbeaten, but not by much. Maidana swarmed all over him from the opening bell and gave him perhaps his toughest fight in a 16-year professional career.

In the end, though, Mayweather got the win just as he did in his previous 45 fights. He retained his WBC welterweight title by winning 117-111 on one scorecard and 116-112 on another. A third judge had it even at 114-114. The Associated Press scored it for Mayweather 115-113. Maidana threw far more punches, but Mayweather was more accurate as the two battled into the late rounds with the fight still very much in doubt. Cheered on by a large contingent of Argentine fans, Maidana took the fight to Mayweather, who was cut by the right eye in the fourth round by an accidental head butt.

"It was a tough, competitive fight," Mayweather said. "I normally like to go out there and box and move. But he put pressure on me. I wanted to give the fans what they wanted to see so I stood and fought him." Maidana raised his arms in victory when the final bell sounded, and Mayweather watched pensively from his corner as the scorecards were added up before he was declared the winner. "I won the fight," Maidana said. "He didn't fight like a man."

Punch stats by Compubox showed Mayweather landing 230 of 426 punches to 221 of 858 for Maidana. It was the most punches landed by any fighter against Mayweather in 38 fights where punch stats were compiled. "I couldn't see for two rounds after the head butt," Mayweather said. "After I could see again it didn't both me. That's what champions do, they survive and adjust."
Last Update: May 04, 2014 11:31 am
RELATED TOPICS