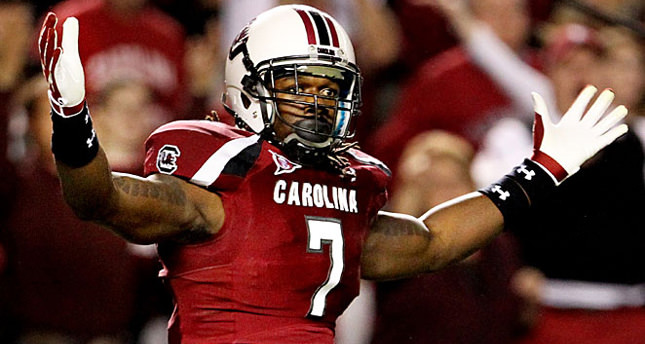 by Associated Press May 09, 2014 12:00 am
NEW YORK — The Houston Texans chose defensive end Jadeveon Clowney with the first pick in the NFL draft on Thursday, while much-vaunted quarterback Johnny Manziel had to wait until pick 22 to get selected.

There had been criticism of Clowney's work ethic last season when playing at college level for South Carolina, and questions about whether the Texans would hold or trade the No. 1 slot, but ultimately Houston went with the powerful defensive lineman.

"I just been proving a lot of people wrong throughout my life," Clowney said. "Growing up, I grew up hard. I always said I'm going to do something great. Hopefully, I'm going to be a Hall of Famer one day."

Manziel sat with a sullen look on his face until Cleveland made its third trade of the round and selected the Texas A&M quarterback, who won the 2012 Heisman Trophy as college football's best player.

"If you call it a slide, I wouldn't call it that at all," he said. "I was drafted in the first round of the NFL draft.

"It's a great story. It's great for me to end up there, at a team that has fans that are as passionate as I am on the field."

Manziel's wait added suspense after the Texans took their time selecting Clowney. Teams normally announce the No. 1 pick in advance, and Houston's failure to do so had prompted speculation it had soured on the defensive end.

Clowney, 21, brings size, speed and power to a lineup that already has 2012 NFL Defensive Player of the Year J.J. Watt. However his diligence had been questioned after he slipped from 13 sacks to just three in 2013. Critics said he was protecting himself from injury in his junior year before declaring early for the draft.

He is the first defensive player taken first overall since Houston selected another end, Mario Williams, in 2006. Williams now is with Buffalo. Houston also made the top pick in its first season, 2002, taking quarterback David Carr. He never lived up to that billing; the Texans hope Clowney has more of an impact.

The first quarterback to go went to Jacksonville in the third slot, but it wasn't 'Johnny Football' Manziel. Instead it was Blake Bortles of Central Florida, whose stock shot up last season and in subsequent workouts. Bortles has drawn comparisons to Pittsburgh's Ben Roethlisberger because of his combination of size and mobility.

"He's a down-to-earth guy, a self-made guy, a blue-collar guy and he wants to be the best he can be," said Jaguars general manager Dave Caldwell, who added a word of caution: "He just needs a little bit of time."

Buffalo traded up to selection No. 4 by sending a first and fourth-round pick in next year's draft to Cleveland. That enabled the Bills to grab playmaking receiver Sammy Watkins of Clemson.

"Dynamic playmaker, and that's what this game is all about," Bills GM Doug Whaley said of Watkins. "He's automatically going to make our quarterback (E.J. Manuel) better."

Another Aggies star was chosen next, receiver Mike Evans to Tampa Bay. The 6-4, 231-pound Evans is durable, versatile and quite emotional. He also couldn't hold back the tears when Goodell called his name.

The crowd thought Manziel might go eighth when Cleveland traded up one spot to get Minnesota's pick. So when the Browns took cornerback Justin Gilbert of Oklahoma State, there was a loud groan from the fans.

Finally, a local team had a chance to make a pick and the audience approved lustily when the New York Giants chose Louisiana State receiver Odell Beckham Jr.

Minnesota finished off the opening round by trading with Seattle to select Louisville's Teddy Bridgewater, the third quarterback taken.