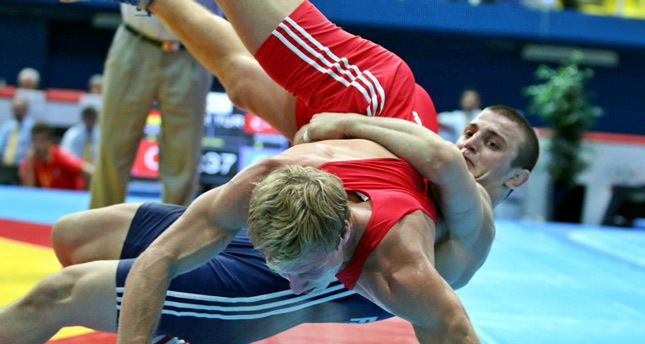 Young national wrestler Furkan Bayrak from Turkey won a gold medal at the FILA Junior World Wrestling Championship held in Croatia's capital, Zagreb, giving hope to for Turkey's "ancestral sport." European junior bronze medalist Bayrak converted in par terre for two points and then flattened Asia junior champion Payam Bouyeri for the fall at 5:58 in the 74 kilogram final. The successful wrestler previously defeated his Indian, Armenian, German and Belarusian rivals to qualify for the final. Bayrak is now targeting a gold medal in the forthcoming 2016 and 2020 Olympics.

Although Bayrak fell behind his Iranian rival at first, Bouyueri was trapped on his back for the fall4, making Bayrak the first Turkish wrestler to achieve a gold medal in the tournament. Turkish Youth and Sports Minister Akif Çağatay Kılıç said: "Furkan Bayrak made us happy by winning the world title. I sincerely congratulate Furkan on behalf of myself, the ministry and our nation. I hope our young sportsmen like Furkan will earn success in the future." Azerbaijan took three gold medals on the opening day of the Greco-Roman competition. Elman Mukhtarov unseated the defending world champion. Mukhtarov, a bronze medal winner one year ago in Sofia, maintained a tight defense against 2013 world champion Karen Aslanyan (Armenia) and fashioned a 4-1 decision in the 60 kilogram final on a pair of counter takedowns. In other finals, Ibrahim Nurullaev opened with a win at 50 kilograms for Azerbaijan and Orhan Nuriyev completed the Azeri trifecta with two force-outs to win the 96 kilogram crown.

Even though Aslanyan finished with silver, Armenia was the only other country to win more than one medal on Tuesday, receiving bronze medals from Slavik Galstyan at 50 kilograms and Sarkis Koucharyan at 74 kilograms. In all, 12 countries shared in the 16 medals handed out in the first half of the Greco-Roman competition. Five-time Africa champion and two-time Olympian Marwa Amri (Tunus) bagged a pair of gold medals in July to become the first wrestler from an African country to top the FILA World Rankings in any of the three Olympic disciplines. Amri, 25, struck gold at the Grand Prix of Spain early in the month with a win over hometown favorite Karima Sanchez Ramis (Spain). Two weeks later Amri prevailed at the Olympic tourney in Greece to become the top-ranked wrestler at 55 kilograms in female wrestling. Amri's two wins give her five titles in 2014, including triumphs at the prestigious Klippan Ladies Open in February and the increasingly competitive African championship in March.

The only blemish of her 2014 campaign is a bronze medal in the City of Sassari Tournament in May. Meanwhile, in the other seven categories, the top-ranked wrestlers were unchanged, but 2012 world champion Jenny Fransson (Sweden) snared a pair of gold medals to claim the No. 2 ranking at 69 kilograms, while Hiroe Suzuki (Japan) won at the Golden Grand Prix Final to claim the second spot at 75 kilograms. Fransson defeated former No. 3 Aline Focken (Germany) for the title in Spain and then made the big leap to No. 2 from 13th place with a win at Olympia. Suzuki, meanwhile, forged a criteria win over former No.1 Adeline Gray to move into the second spot behind Erica Wiebe (Canada). The only No. 1s to win in July were Maria Stadnyk (Azerbaijan) and Yulia Ratkevich (Azerbaijan), wrestling before the home crowd in Baku, and Wiebe - a double winner at the student world championships and the Commonwealth Games. In addition to the big moves made by Fransson and Suzuki, Danielle Lappage (Canada) also won at the student championships and again in Glasgow to vault from No. 16 to No. 8 at 63 kilograms. The rankings are listed by the wrestler's name, country code, the wrestler's most notable or most recent result and the wrestler's position in the previous rankings.

Victoria Anthony (U.S.) notched three falls in the Pan American championships and then received an injury default from Canada Cup winner Jessica MacDonald (Canada) for the title and No. 5 in the rankings. Yarygin Grand Prix winner Yuki Irie (Japan) edged Klippan Open bronze medalist Alyssa Lampe (USA) in the first round of the Golden Grand Prix Final and outlasted Asia champion Tatyana Amanzhol (Kazakhstan), 13-10, in the bout for third place and No. 6 in the 48 kilogram poll.
Last Update: Aug 07, 2014 1:57 am
RELATED TOPICS