Sultans of the Net lose against Russia with controversial decision 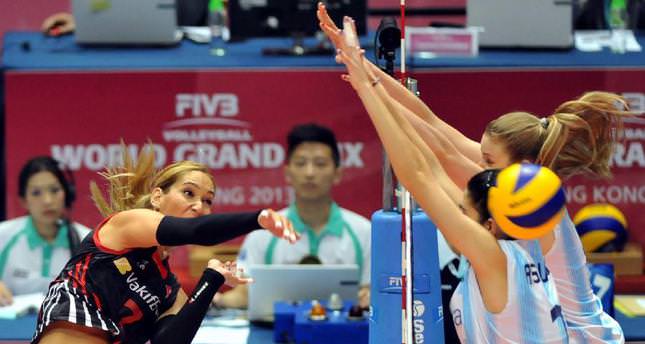 by Daily Sabah Aug 23, 2014 12:00 am
Russia beat Turkey 3-2 (25-22, 26-24, 13-25, 25-27, 15-12) on the third day of the FIVB World Grand Prix Finals at Ariake Coliseum in Tokyo on Friday. Turkey were upset with a refereeing decision that saw a point replayed. Decision made by the two referees El Kheshen Waleed (Egypt) and Tano Akihiko (Japan) were considered "controversial" by the Turkish side. In the first set (17th point) and second set (12th point), after the objection that Turkish team captain Gözde Sonsırma stepped over the 3-meter line during attacking from the backcourt, it was applied to the challenge system. Cameras and computers showed that the player didn't step the line and the computer judged "No Fault." However, Egyptian referee Waleed didn't change his decision. And Russia took advantage to extend their lead, with Kosheleva sending down four big spikes as they reached set point at 24-19.

Three straight points by Gözde Sonsırma gave Turkey hope, but Malykh smashed a high ball into the opposite court to put Russia 1-0 up.
Turkey had a good start in the second set as Russia went off the boil. Toksoy came up with a nice kill and a block on Kosheleva as the Sultans went into the first break 8-4 ahead. Poor Russian reception and good Turkish defending saw the Sultans surge ahead 14-6. Russia came alive again at the start of the fourth set with three good points from Malykh as they moved into a 6-3 lead, but two Turkish blocks and an ace by Meliha İsmailoğlu saw the Sultans one point ahead at the first TTO.

Turkey converted the fourth, sending the match to a tiebreaker. Turkey moved into a quick lead in the fifth set and were helped by a successful challenge on a shot by İsmailoğlu. Akman then came up with two huge points - a classy kill and a block on Kosheleva - before Russia turned the tables on the Sultans with four straight points. Sonsırma's next spike was challenged and caused a long delay as the officials decided the outcome. Sonsırma earned a yellow card but was penalised for an attackline fault, giving Russia a 13-10 lead. Turkey took the next two points before Sonsırma sent a shot wide to hand Russia match point. Shcherban then fired the ball over to end the match. In the other matches, Brazil breezed past Belgium 3-0 (25-10, 25-12, 25-12).
Last Update: Aug 23, 2014 1:57 am
RELATED TOPICS