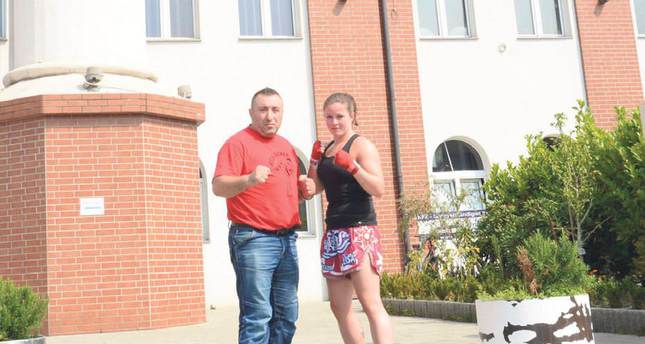 by Cengiz Parlayan Sep 07, 2014 12:00 am
German Lisa Schewe, who ranks number two in Thai Boxing, is preparing for the world championship in the sports academy within Müllheim Central Mosque. Schewe, 24, is training for the World Championship that will take place from Sept. 27-29 at Rhein-Ruhr Sports Academy affiliated to Müllheim Central Fatih Mosque. Schewe who is also a teacher of mathematics and philosophy said she has been doing Thai boxing for the last 15 years. She stated that she chose Fatih Mosque due to the working conditions and trainer Arif Öztürk.

She said the Mosque's community shows her great interest and support, adding she is working with Turkish boxers at the gym. She said that if she ever became the world champion, it would be thanks to the opportunities that the mosque provides for her. She further said Turkish women are good at sports and advised that they can put their lives in order by doing sports. Schewe said Turkish people support her for the championship. She noted that she is aware of her opponent Anja Fucs strength, but she believes in herself. Trainer Arif Öztürk said, "We are training boxers of both German and Turkish origins who can fight in world championships. Our door is open for everyone. I believe we are contributing to the blending process of German and Turkish people."