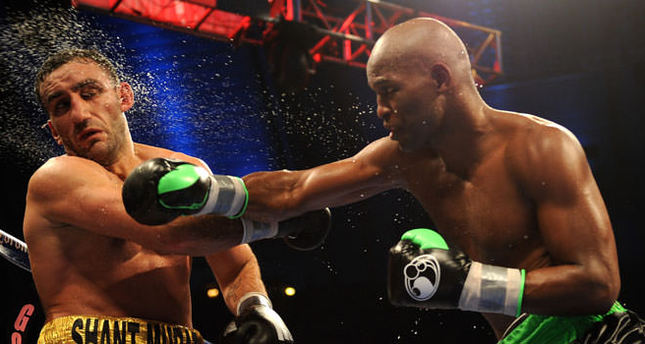 Two months shy of his 50th birthday, Hopkins enters the ring once again on Saturday in Atlantic City, New Jersey, determined to both retain his title and show he still has the reflexes to compete at a top level

It's usually not a pretty sight when aging athletes still think they can do the things they once did in their youth. What Bernard Hopkins sometimes does isn't always pretty either.

The light heavyweight champion is a master defensive fighter who doesn't always thrill, but usually finds a way to win.

Two months shy of his 50th birthday, Hopkins enters the ring once again on Saturday in Atlantic City, New Jersey, determined to both retain his title and show he still has the reflexes to compete at a top level. He will be trying to mitigate the brutal punching power of a Russian young enough to be his son.

There are some in boxing who think Sergey Kovalev will not only finally end Hopkins' career, but could seriously hurt him. Those are legitimate fears, because boxing is not a game, and older fighters are more often to be pitied than they are to be celebrated.

Relax, says the former Executioner who now goes by the nickname Alien. He's boxing not only for himself, but for everyone who is growing grey in America.

"What 40-plus guy doesn't want to see another 40-plus guy beat a guy 20 years younger than him?" Hopkins asks. "If I was this age hitting home runs on the Yankees they would all be talking about me."

The fearsome Kovalev who has never lost in knocking out 23 of his 26 opponents looks to be an almost insurmountable test even for a fighter who, so far, has defied most of the normal laws of aging. Oddsmakers make Hopkins a 3-1 underdog, and Kovalev says he will be the fighter who finally shuts up the loquacious Hopkins.

"I don't really understand what Bernard is saying. Even if I understood, I wouldn't care," the 31-year-old Kovalev says. "I don't worry about him. I'll go into the ring and do my job."

Boxing history is littered with fighters who never knew when to retire, sometimes with tragic consequences. The great Joe Louis fought far too long as he sought to pay the taxman, and Archie Moore was in the 208th fight of his professional career and about to celebrate his 46th birthday when a rising young heavyweight named Cassius Clay knocked him out in the fourth round of their 1962 bout.

How Hopkins has at least so far escaped with both his wits and his marbles intact has a lot to do with how he trains and how he fights. He doesn't fight all that often, always stays in shape in between fights, and once in the ring tends to make it very difficult for the man in front of him to land a punch.

"I haven't seen Hopkins get hit flush in years," said Oscar De La Hoya, who was stopped by Hopkins with a body punch in their 2004 fight. "He's very crafty and knows how to move with punches. He can offset your punching power, take away your strength."

That may not be the most marketable style, but it's a highly effective one. In the decade of his 40s, Hopkins is 10-4 with one no contest and one draw, and he is the proud owner of two of the three light heavyweight belts that will be at stake.

Besides, Hopkins does most of his promoting with his mouth rather than his fists as a minority partner with De La Hoya in Golden Boy Promotions.

"Fighting is fun and that's the scary part," Hopkins said. "I'm having more fun in the last 10 years than I had in the first 15 or 20 years of my career. It's completely backward from the way I'm supposed to be thinking at this stage of my life."

Indeed, the best part of Hopkins fighting at such an advanced age is that he wants to fight, not that he has to fight. The former con from Philadelphia re-invented himself long ago as a businessman-fighter who has money stashed away in long-term conservative investments, and likes to talk about his fondness for shopping at discount stores.

He'll pick up another nice payday against Kovalev, but that's not his main goal. Hopkins is determined to show what he can do before he turns 50 in January to whet the appetites of boxing fans for what he can do after he hits the mid-century mark.

"I will stand in the pocket against this guy who beats people up, and they will see me take him apart," Hopkins said. "There's a risk that a lot of other 50-year-old guys are going to get their butt beat, so I've got to be conscious about fighting in my 50s. But 2015 is going to be a hell of a year for me."

If he can somehow find a way to beat Kovalev, it could be a pretty good year for boxing, too.