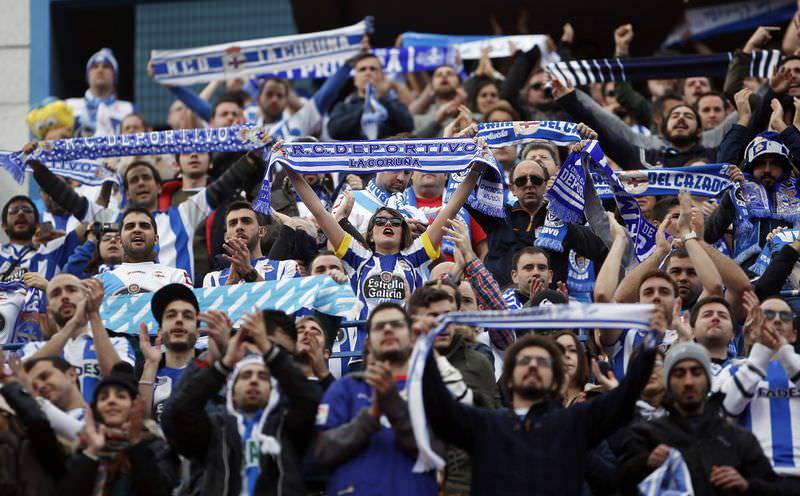 by Associated Press Dec 01, 2014 12:00 am
One man died and 11 others suffered minor injuries after a fight broke out outside Atletico Madrid's soccer stadium between its fans and those of visiting team Deportivo La Coruna, officials said Sunday.

Madrid's Clinico San Carlos hospital said a man died of injuries sustained in the clash between rival fans that broke out hours before the game near the Vicente Calderon stadium. Police made several arrests.

The man, identified only as a 43-year-old Deportivo fan, had to be removed from Madrid's Manzanares River and attended to by emergency services, which initially resuscitated him before transferring him to hospital where he died hours later.

Televised images on Canal Plus showed large groups of men wielding what appeared to be metal poles, tossing chairs and firing flares on the wide pavement along the bank of the river. Images also showed at least one man falling into the water.

The presidents of both clubs appeared together on television to lament the incident.

"This has nothing to do with football," said Atletico president Enrique Cerezo. "Neither Atletico nor Deportivo have anything to do with these incidents, they are organized by radical groups who have their histories and accounts to settle."

Sports minister Jose Ignacio Wert also said the clash was not linked to sport, but it nevertheless tarnished its image and "had to be eradicated."

Two people who were at a bar linked to Atletico's fan club in the northwestern city of A Coruna were slightly injured in a separate incident at noon when they were involved in a barroom brawl with six hooded men, Europa Press news agency reported.

Police said on its Twitter account they had made 24 arrests among four radical groups linked to football clubs, and named them as: "Riazor Blues, Atletico Front, Buccaneers, and Alkor Hooligans."

The 11 injured included a police officer who suffered a broken finger.

"We are very sad, and we condemn this completely," said Atletico coach Diego Simeone. "We hope these types of situations don't happen again."

The Spanish league said in a statement that it had tried to suspend the match before it began.

"The Spanish football league was firm in its conviction to suspend the match, but that wasn't possible," the league said in a statement without explaining why the match started as scheduled at 1100 GMT.

In December 1998 a Real Sociedad fan was killed outside Atletico's stadium and a man was sentenced to a 17-year jail term for his murder.