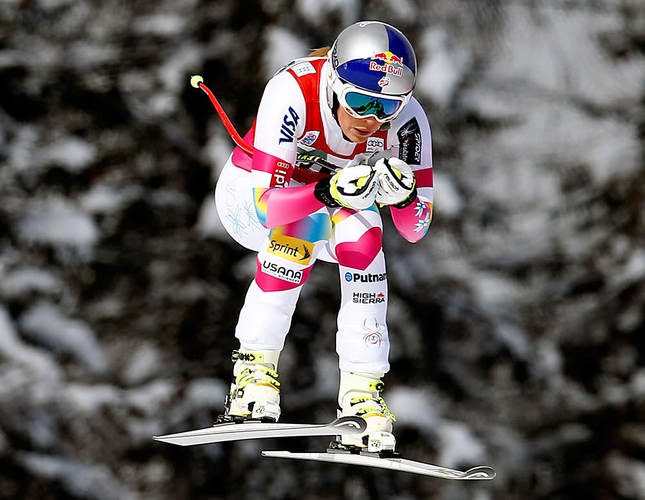 by Associated Press Jan 18, 2015 12:00 am
Lindsey Vonn battled through fog and soft snow conditions to win a demanding downhill Sunday to match Annemarie Moser-Proell's 35-year-old record of 62 World Cup wins, capping a comeback from two serious knee surgeries. The American clocked a time of 1 minute, 39.61 seconds down the Olympia delle Tofane course to finish 0.32 ahead of Elisabeth Goergl of Austria.

"It was just a tough day out there. The snow was a little bit soft but I did the best that I could," Vonn said. "I fought really hard and to have a 62nd win with my whole family here pretty much I'm missing some brothers and sisters it just feels amazing and it's such a special day." Vonn's dad, mother, step dad, step mom and younger sister Laura attended the race. Family and members of Vonn's coaching staff put on celebratory T-shirts that said, "Congratulations to our golden Lindsey! Awesome!"

Daniela Merighetti of Italy was third, 0.54 back. Vonn can break Moser-Proell's record in a super-G scheduled for today. Moser-Proell, an Austrian great, established the record between 1970 and 1980. Swedish standout Ingemark Stenmark holds the men's record of 86 wins. Vonn came down with the No. 20 bib and had a nervous wait when Goergl came down with the No. 22 bib and was faster at the first two checkpoints. But she couldn't keep up with Vonn on the final turns. It was Vonn's third win this season all in downhill and the eighth of her career in Cortina. Vonn has won 32 downhills, 20 super-Gs, three giant slaloms, two slaloms and five combined races.