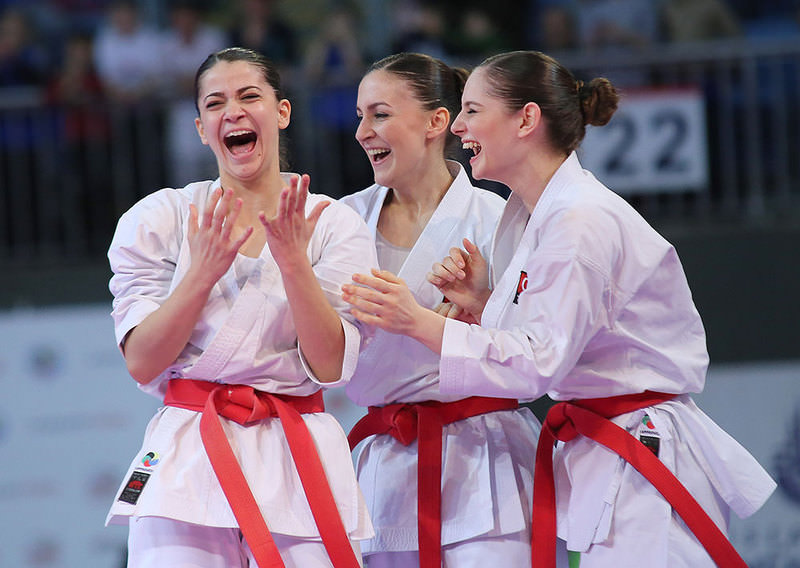 That was good news and consolation after Turkey's men's team had lost the bronze medal fight in the individual kata category on Saturday. The men's team consisting of Orçun Duman, Arslan Çalışkan and Ali Sofuoğlu lost the challenge to France's national team 4-1. Dilara Bozan, who became the first Turkish woman athlete to advance to the finals in the kata category, lost against her Spanish rival Jaime Sandra Sanchez. Sanchez performed the original kata, called "Chatan Yara Kushanku," and surpassed her Turkish rival.

Likewise, Mehmet Yakan, who became the first sportsman to advance to the final for the first time in the kata category, was defeated by Spaniard Damian Quintero 4-1. Quintero had previously become the European champion in 2013 and won a silver medal last year.

Turkish karateka Burak Uygur was also defeated by his Azerbaijani rival Niyazi Aliyev in the 67 kg final in the kumite category to win the silver medal. However, it was not a bad performance considering this was Uygur's first European challenge. Youth and Sports Minister Akif Çağatay Kılıç watched the game and consoled Uygur. After the games, Kılıç presented the medals to the winning karatekas. Kılıç also spoke at the event. "I congratulate our national karatekas who crowned their struggles with medals on behalf of the Turkish nation," Kılıç said.

Turkey's last world and European champion, Serap Özçelik, managed to defeat her Ukrainian rival Kateryna Kryva in the women's individual tatami category to win a bronze medal. Turkey's national women's team won a bronze medal in the tatami category, beating Macedonia 2-1. The championship will conclude with the final games in the women's and men's kata competitions and the men's kumite competition.