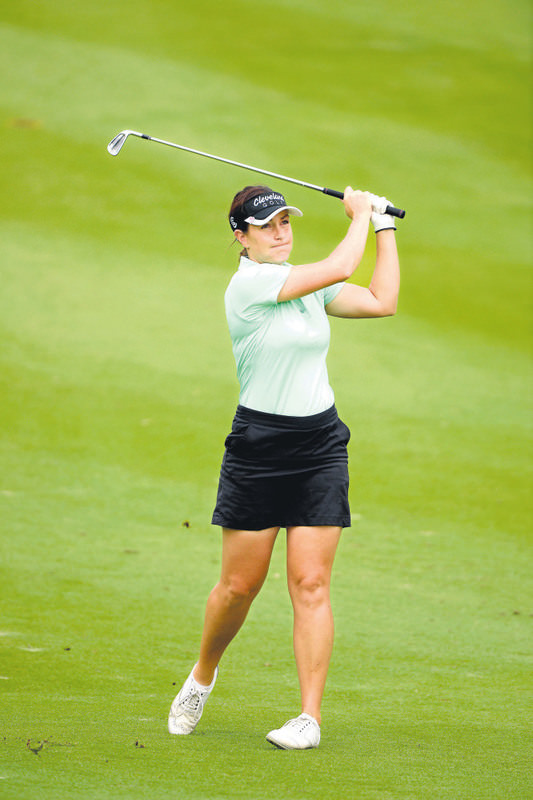 126 professional lady golfers from 32 countries will come to Antalya, Turkey to get title in the 7th Turkish Airlines Ladies Open on May 17-20

Turkey will host one of the world's most important ladies golf events next month as some of the best players in the world descend on Antalya. The Turkish leg of the Ladies European Tour (LET), "Turkish Airlines Ladies Open" will be held at the Carya Golf Club in Belek, Antalya from May 17-20. A total of 126 professional lady golfers from 32 countries will be competing at the this year's tournament to be organized by Mineks International and Regnum Carya and Spa Resort.

Ann-Kathrin Lindner, Rebecca Artis, Valentine Derrey, Camilla Lennarth, Florentyna Parker, Julie Greciet, Connie Chen, Ssu-Chia Cheng, Becky Brewerton, Melissa Reid are just some of the participants in the organization. Laura Davis, who is the best English lady golfer and has won 80 tournaments worldwide, will also participate. The tour will go on throughout the year. The golfers will compete in other countries such as New Zealand, China, Morocco, France, the Netherlands, U.K., Scotland, Czech Republic, Sweden, Germany, India, South Africa and United Arab Emirates. Hakan Duran, the general manager of Regnum Carya and Spa Resort, said "We are happy to host such a big event. Golf is watched by big masses around the world. The tournament will be broadcast live during three days. Last year, 3 billion viewers in 80 countries watched the tournaments. The fact that the final will be held on Wednesday will increase the viewers' number." Duran stressed that the prize money has been raised to 500,000 euros from 250,000 euros last year. "We believe tournaments like this are a big opportunity to promote our region in the world," he added. Firkin Öztürk, Chairman of the Board of Regnum Carya and Spa Resort said, "Tourism is providing great contributions for Turkey. If we build more beautiful tourist facilities, we can attract more tourists. Especially we must attract rich tourists."

The first ever LET event in Turkey, the 200,000 euros Garanti American Express Turkish Ladies Open was held in 2008 at the National Golf Club and was won by Sweden´s Lotta Wahlin, who stormed to a maiden tour victory by 12 shots. Wahlin finished with a 7-under par total of 285. Johanna Westberg of Sweden and South Africa's Stacy Lee Bregman and Spaniard Paula Marti (the 2002 order of merit winner) tied for second place at 5 over. Due to the economic crisis in 2009, the second LET event in Turkey was held in 2010 and was won by Melissa Reid. Reid completed the 54-hole event at 3-under-par 216, which was good for a two-stroke win at the National Golf Club. Christel Bolejon posted a 1-under 72 to share second place at minus-2 with Iben Tinning who closed with a 74. Boeljon was one of five players to break par on the finals day's difficult conditions. The 2011 Turkish Airlines Ladies Open was held on May 5-May 8, 2011; Christel Boeljon from Netherlands won with 5-under par and a 287 score and took the 37,500 euros first place prize. Florentyna Parker from England and Becky Brewerton from the Wales came in the second place both with under-2 par and 290 score and won 21,437.50 euros each. The National Golf Club was founded in 1994 and is the first golf course built in southern Turkey. The par-72 championship course was designed by Ryder Cup player David Feherty. The club has undergone an intensive course conditioning program and is in perfect condition for this year's tournament. Meanwhile, Gwladys Nocera made amends for the heartbreak of her play-off defeat 12 months ago by coming back and claiming a two stroke victory in the Lalla Meryem Cup at Golf de L'Ocean in Agadir on Sunday. The 39-year-old Frenchwoman sealed her 14th Ladies European Tour title, just three months after her last victory in the Hero Women's Indian Open. She started the day with a two-stroke lead and a final round of 1-under par 70 was enough to end two ahead of three other players: English duo Melissa Reid (66) and Felicity Johnson (67) and South African Nicole Garcia (70).

"I remember last year when Charley (Hull) kept on getting birdies in the last round, so I knew this morning that it could happen. All I kept saying was I need to play my game and make as many birdies as I can. I tried my best," said Nocera, who also won the Lalla Meryem Cup in 2007, before it was sanctioned by the Ladies European Tour. "Gwladys is a great player who's done this many times before," said Johnson, a two-time LET winner, who claimed her last title at the 2011 French Open. Melissa Reid, who won her last title at the 2012 Prague Golf Masters, was also delighted to be back in contention. She said: "I actually felt pretty good this morning and it's nice to be in this position, put yourself back in contention. My driver was not a good boy today but I scrambled really, really well. I holed a chip and holed a pitch, so it's one of those things. I'm really happy with the progress I'm making. It's a huge positive and I would have taken second at the start of the week." Following her victory, Nocera now has 19 Life Member Points and needs just one more point to become a Life Member of the Ladies European Tour. The Ladies European Tour is a professional ladies golf tournament that was founded in 1979 and is based in the U.K. It is deemed to be one of the most prestigious tournaments in Europe. The tour is run by a Board of Directors and the Players' Council. Most of the players on the tour are from Europe and the largest non-European contingency is from Australia.
Last Update: Apr 02, 2015 1:58 am
RELATED TOPICS