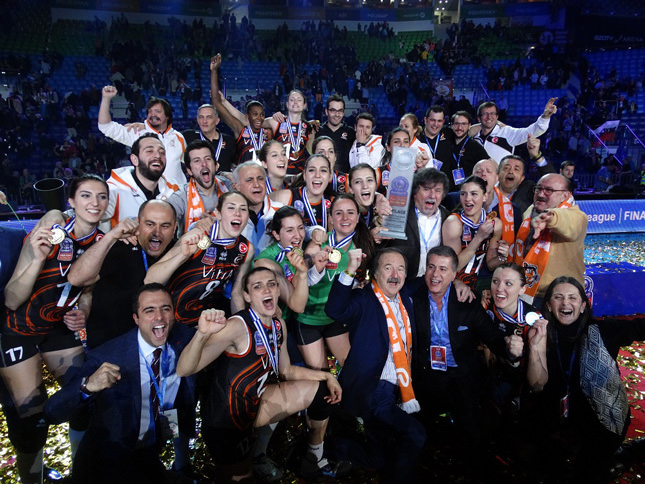 In the breath-taking atmosphere at the Azoty Arena in Szczecin, the two teams played a competitive first set. Unendo Yamamay put in some great blocking efforts, but eventually could not hold on to a 16-12 lead. Maja Poljak continued her great performance from Saturday's semi-final. In the end she blocked a spike by Valentina Diouf to close the set at 25-22. Eczacıbaşı VitrA started the second set with a 3-0 lead. Unendo Yamamay managed to catch up on several occasions, but were never able to turn things around. With Bethania De La Cruz on fire on offence, the Turkish squad regained control and won the set by a comfortable 25-20. With their backs against the wall, the players of Unendo Yamamay put on a fight in the third set.

The suspense was alive through 16-16. After 20-19, however, Eczacıbaşı VitrA broke away with three consecutive points. The opponents responded with two points, but it was not enough to change the result. At 25-21, the glorious moment for Eczacıbaşı Vitra finally came. The Turkish team deservedly took their place at the top of European volleyball.

Four players scored 13 points each to jointly top the scorers' chart of the match – Eczacıbaşı's Gözde Yılmaz, Bethania De La Cruz and Jordan Larson-Burbach and Unendo Yamamay's Valentina Diouf. Eczacıbaşı VitrA players and technical staff were jubilant after the match. Esra Gümüş Kırıcı, captain of Eczacıbaşı VitrA said, "We prepared very hard and worked very hard for this tournament. I am very happy that we won this cup, it is a great feeling. It is my first gold medal from a European competition. I know that the Polish fans are very loud during the matches and they really like volleyball so it is amazing that we had such big support not only from our fans."

Francesca Marcon, captain of Unendo Yamamay said, "When you play, you want to win everything, so we are a little sad about the result of the last match, but very happy about this silver medal. I want to congratulate my team-mates, because I think we made a great progress during this season. This arena, its audience and hard matches against strong teams - this is what I am going to remember from this Final Four."

Carlo Parisi, head coach of Unendo Yamamay said, "Right now we are very happy with this second place and maybe only a bit dissatisfied with the result of the final match. This is a historic moment for us - the highest step we took so far. It was a spectacular Final Four at a beautiful arena and even though the home team was not in the final match, we had a fantastic audience."

The fans at the Azoty Arena in Szczecin erupted when captain Esra Gümüş Kırıcı lifted the cup in a moment of sporting glory. Following an exciting light show with several songs performed by Polish pop-star Natasza Urbanska, which further fired up an already thrilled crowd in the stands, CEV President Andre Meyer first presented a plaque to the president of the organizing club Chemik Police Joanna Zurowska.

The presentation of the Fair Play award and the members of the Dream Team were next, with the top honor of being declared the Most Valuable Player (MVP) of the Final Four tournament going to Eczacıbaşı VitrA's outside spiker Jordan Larson-Burbach.

"I am really pleased with the way this tournament was organized," said Meyer. "The work done by the club of Chemik Police with the valuable assistance of the national federation of Poland here, in Szczecin, produced perfect results, displaying the full extent of our sport's beauty. As usual, the fans here in Poland were also a major contributor to the fantastic atmosphere and to what I could say was a spectacular conclusion of the season in the 2015 CEV DenizBank Volleyball Champions League."