A single match may have changed a man's life 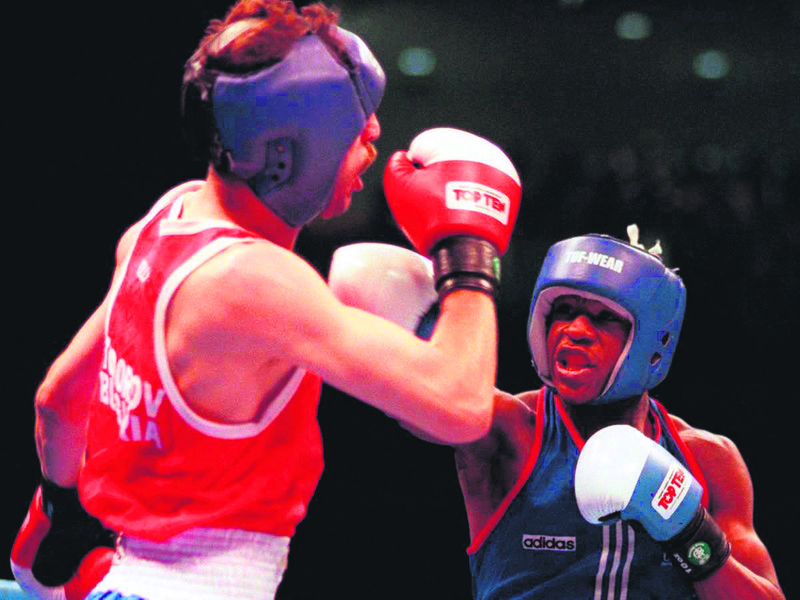 In 1996, Turkish-origin Bulgarian boxer Ahmet Sabri (L) faced an American rival Floyd Mayweather, who was penniless then but now one of the wealthiest sportsmen in the world.
by daily sabah Apr 12, 2015 12:00 am

Turkish-origin Bulgarian boxer Ahmet Sabri refused a professional contract after beating now-world champion Floyd Mayweather in the semi-final match of the Atlanta Olympic Games in 1996. Despite the win, the money men flocked to Mayweather. Now, Mayweather has a $280 million fortune, while Sabri lives on just a $580 pension

A summertime in 1996... The Atlanta Summer Olympics was held in Atlanta where one of the most important but forgotten boxing matches in history took place. Turkish-origin Bulgarian boxer Serafim Todorov (Ahmet Sabri) faced an American rival Floyd Mayweather, who was penniless then but now one of the wealthiest sportsmen in the world.

According to Turkish daily, Akşam, Todorov was 27 years old and Mayweather 19. Todorov began the last round one point behind Mayweather but he beat his rival mercilessly in the last three minutes of the last round 10-9 and advanced to the final. Todorov lost against Thai rival Somluck Kamsing in the final. He said about that day: "I was sitting front and Mayweather was seated behind me in a room. There were three other people in the room. Two of them were managers. The other one was a translator. They put a contract in my lap for my signing. I said no without hesitating. Do you know what happened later? Those three men went behind me and sat beside Mayweather. He accepted that contract. I could have been him."

Mayweather has never been beaten since that day. He has become one of the highest paid sportsmen in the world. His fortune stands at $280 million. However, Todorov, who is the only person who managed to beat him, has been unemployed and broke for years. He is living in a slum in Bulgaria and lives on only a $435 pension.

Forbes said that Mayweather will likely earn at least $150 million and Pacquiao more than $100 million for the welterweight world title showdown in Las Vegas.

The financial news website said payouts could be higher still if more than three million pay-per-views are sold.

Mayweather's haul would represent the highest yearly earnings ever by an athlete, surpassing Tiger Woods' inflation-adjusted record of $125 million in 2008, Forbes said. Mayweather and Pacquiao will fight for the $250 million reward. This is the most expensive match of boxing history.

Mayweather became professional after the match against Todorov in 1996. 19 years passed and he has not lost in 47 fights since.

Todorov entered Turkey from the Kapıkule Border Gate in 1997. The picture taken at the moment he entered Turkey created a sensation in Turkey. If he could have taken to the boxing ring for the Turkish national team in the World Championship he would have earned $1 million. In order to become the Turkish national team boxer, he appealed to be a Turkish citizen. He is of Turkish decent and is Muslim. But after World War I, his ancestors stayed within the Bulgarian borders after the Ottoman Empire had collapsed. He always used his Turkish name, Ahmet Sabri.

After the collapse of the communist bloc, the Bulgarian government gave Turkish-origin sportsmen and women a hard time. They adopted a discrimination policy against them. Caner Doğaneli, then Turkish Box Federation President says, "Todorov was an unbelievable boxer. He had great technique. He had impressive eyes and unprecedented boxing intelligence. I have never seen anybody better. He desired very much to come to Turkey and fight. They (the Bulgarian authorities) did not let go of him in the first place. He could not come to Turkey. However, he made it later and joined the Turkish national team's camp in İstanbul and Ankara.

"We negotiated with the Bulgarians back then. And we made an agreement on a payment. We would have given them $250,000 and he would have taken to the canvas for Turkey. But we could not agree on how we would make the payment. They wanted us to give the cash money to two men who were sent by them. But I wanted to give it officially and put the agreement on paper at the Turkish embassy in Bulgaria. They did not accept it. Todorov was an unprecedented talent. Then, if they had demanded we would have been ready to pay $300-500,000 for him. In that era, we were authorized to give a blank check for the sportsmen and women like Todorov."
Last Update: Apr 13, 2015 11:19 am
RELATED TOPICS