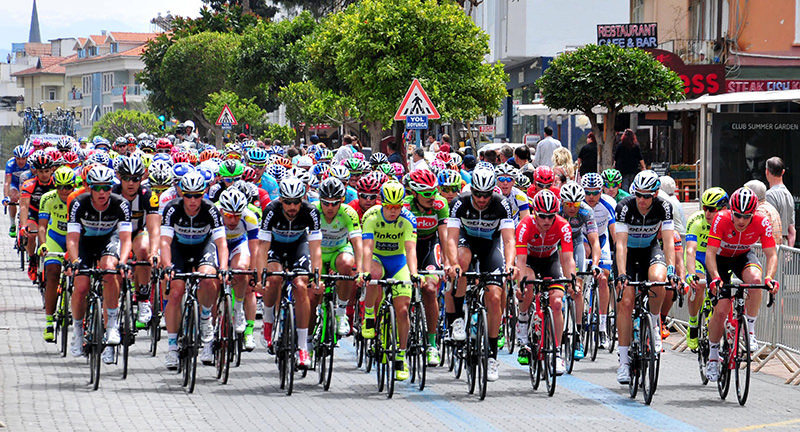 | DHA Photo
by Hakan Baş Apr 26, 2015 12:00 am
Turkey is hosting 165 cyclists from 21 teams in the 51st Presidential Cycling Tour starting at the seaside town of Alanya and finishing eight days later with a stunning stage around Istanbul. Mark Cavendish for Etixx - Quick-Step and Andre Greipel for Lotto-Soudal head a world-class field of sprinters while climbing specialists with designs for the overall classification include the likes of the TUR 2013 champion Natnael Berhande Teweldemedhin and his MTN-Qhubeka teammate Serge Pauwels, Tomasz Marczynski and Kevin Seeldraeyers for Torku Şekerspor, Eduardo Sepulveda for Bretagne-Seche Environnement, Cameron Meyer for Orica-GreenEdge) and Carlos Quintero for Team Colombia. The event is used to promote Turkey.

World famous British sprinter Mark Cavendish is racing for the second time in Turkey. The race was started by Presidency Secretary-General Fahri Kasırga, Presidential Spokesman İbrahim Kalın, Foreign Secretary Mevlüt Çavuşoğlu and the governor of Antalya, Muammer together. On the first day of the tournament, participants pedaled the 145-kilometer Alanya-Gazipaşa-Alanya stage. The event, which is the only intercontinental bicycle tour, has eight stages. It finishes on May 3 in Istanbul. Last year, British cyclist Adam Yates won the 50th edition of the Presidential Cycling Tour of Turkey following the final stage in Istanbul on May 4. Yates held on to his overall classification lead and finished the eight-day tour in 30 hours, 26 minutes, 22 seconds, edging Estonia's Rein Taaramae of team Cofidis by just five seconds.

Cavendish of the team OmegaPharma-QuickStep won the final stage, which included a passage over the Bosporus Bridge, in 2 hours, 35 minutes in 2014. The win was Cavendish's fourth in eight stages and sealed the British sprint king's win of the Green Jersey as the leader of the Sprint Classification.

Speaking before the event, Natnael Berhane of MTN-Qhubeka said: "I've already won one TUR with Europcar [in 2013], and I asked my new team, MTN-Qhubeka, if I could come back because I really like this race. The route suits me because it is hilly but not excessively so. I hope to repeat my success from two years ago, so I rode the Tour of Trentino in order to arrive in the best possible condition and got into a long breakaway on Thursday."

Carlos Quintero of Team Colombia said: "We have a mixed team with Edwin Avila and Sebastian Molano for the sprints and for the mountains, Edward Dias, Alex Cano and me. The idea is to do a very good race. It's time I took responsibility and accepted the challenge of riding for the General Classification."

Tomasz Marczynski of Torku Şekerspor said: "I'm in good shape. Two weeks ago I won three stages and the General Classification at the Tour of Morocco. I felt very, very good there. I've ridden the race twice with CCC, in 2010, when I fell, and last year, when I was 13th, riding in the service of Davide Rebellin. This year, I'm riding for myself. I've based the whole of the first part of my season around this race. For my team, Torku, it is the equivalent of the Tour de France. And for all the teams, it is a fantastic opportunity to show themselves on Eurosport for eight days."
Last Update: Apr 26, 2015 3:55 pm
RELATED TOPICS