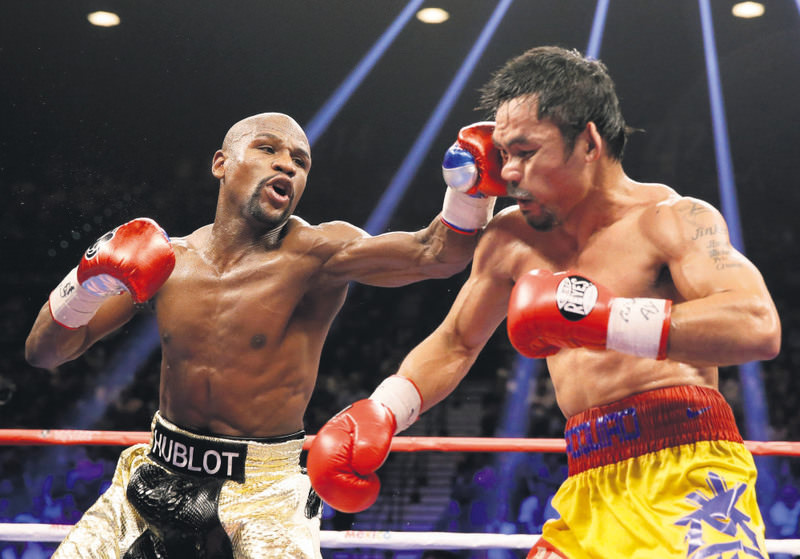 by Jun 11, 2015 12:00 am
Floyd "Money" Mayweather has beaten Manny Pacquiao again: the undefeated US boxer leads his Filipino rival atop Forbes' latest list of the world's highest-paid sports figures. Mayweather tops the list for the second year in a row with the majority of his $300 million in earnings over the past 12 months coming from his May mega-fight with Pacquiao. Thanks to his take from the fight, Pacquiao is second on the list released on Wednesday with $160 million in earnings, joining Mayweather and Tiger Woods as the only sportsmen to earn nine figures in a 12-month period. The highest-grossing fight in history, which generated $400 million in U.S. revenue, accounts for much of the $460 million earnings increase on the 2015 list, Forbes said. According to the financial magazine's calculations - which take into account salaries, bonuses, prize money, appearance fees and estimated licensing and endorsement income - the top 100 earned a total of $3.2 billion over the last 12 months.

Real Madrid forward Cristiano Ronaldo edged Barcelona rival Lionel Messi for third on the list,with Ronaldo coming in at $79 million and Messi $73.8 million. Swiss tennis great Roger Federer rounded out the top five with total earnings of $67 million. Woods remains in the top 10 at number nine ($50.6 million), despite the decline in his game that has seen his world ranking slide to 181. The 14-time major champion's old rival Phil Mickelson is the highest-paid golfer at eighth ($50.8 million) - with reigning world number one Rory McIlroy of Northern Ireland coming in at 12th. The top 10 also features three NBA players: LeBron James at sixth, Kevin Durant at seventh and Kobe Bryant at 10th. Once again, Russian tennis star Maria Sharapova is the highest woman on the list at 26 - with total earnings of $29.7 million. World number one Serena Williams is the only other woman in the top 100 at number 47 ($26.4 million).
Last Update: Jun 11, 2015 11:56 pm
RELATED TOPICS