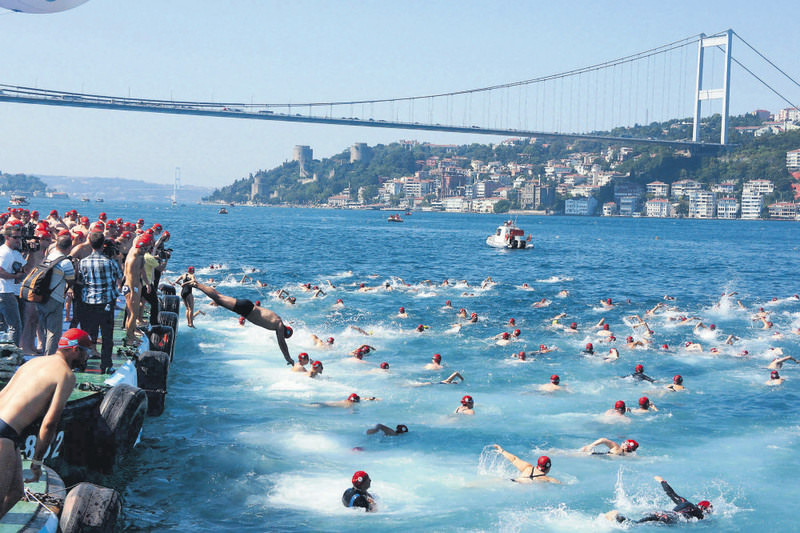 by Anadolu Agency Jun 12, 2015 12:00 am
Foreigners have shown great interest in the 2015 Samsung Bosphorus Cross-Continental Swimming Race as the 900-foreign-swimmer quota was filled on Thursday in 10 hours.

"The Samsung Bosphorus Cross-Continental Swimming Race is at such a level that we cannot even satisfy the demand," the Turkish National Olympic Committee (TMOK) Vice President Nihat Usta told Anadolu Agency.

Usta said that this year only 1,800 swimmers can participate due to security reasons.

"Half of the participants are from Turkey and that's why we imposed a quota for foreign swimmers," he said. "When the number reached 900, registration was closed. The 900-foreign-swimmer quota was filled in 10 hours."

The swimmers will begin the race from one the famous stops on the Bosporus in Kanlıca on the Asian side and start swimming towards Kuruçeşme in Europe - for a total of 6.5 kilometers.

Medals and cups will be given to winning contestants at an award ceremony for the categories of women, men and disabled swimmers in different age groups.

Usta said that they extended the applications deadline to June 30 in order for the Gallipoli 1915 Memorial Swim - organized by the Olympics body on the sidelines of the 100th anniversary of 1915 Çanakkale Battle - to take place.The vice president maintained that the Gallipoli swimming event will be held on Aug. 1, one week after July 26 Samsung Bosphorus Cross-Continental Swimming Race.

Usta said the Gallipoli event will mark the first time a Turkish sports organization is held near Anzac Cove.

"During the event, swimmers will dive into the water 1915 meters off the Anzac coast and swim until they reach the coast," he said.

Usta stressed that it was not a swimming race but a symbolic event, in which wreaths will be thrown into the water right at the start of the event as a call for peace and friendship.

"So far, we have received over 500 applications including 100 foreigners," he added.

Turkey hosted a massive event on April 25, commemorated as Anzac Day, to mark the 100th anniversary of the arrival of Australian and New Zealand Army Corps - known as ANZAC - on the shores of western Çanakkale.

Gallipoli War, known as the Battle of Çanakkale in Turkey, was the Allies' attempt to open the Çanakkale Strait to allow warships to threaten the Ottoman capital, Istanbul, and take Turkey out of the war.
Last Update: Jun 12, 2015 9:47 pm
RELATED TOPICS