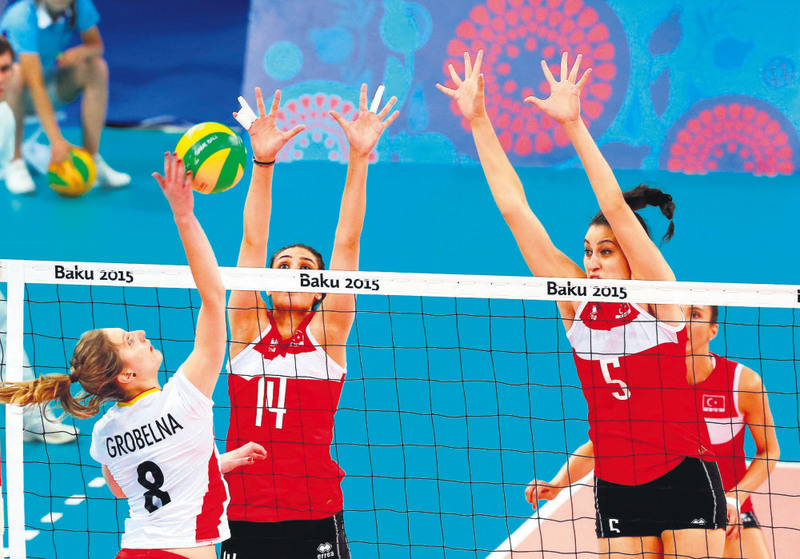 by Daily Sabah Jun 18, 2015 12:00 am
Turkey moved one step closer to qualification for the women's volleyball quarter-finals while Russia claimed their first win of the Baku 2015 European Games at Crystal Hall 1 on Wednesday evening. In the first match of the night, Turkey swept aside Belgium 3-0 to pick up their second win of the tournament. In a match that lasted just 76 minutes, Turkey looked comfortable against the 2013 European championship bronze medalists, and wing spiker Neriman Özsoy believed this was due to her side's hard work and sound preparation. She said: "It was a difficult game, but we prepared well and our tactics worked well on the court to stop them. They couldn't play their level because we did a really good job. I'm so happy to be second in the group, but we have to beat Romania." The final game of the day was a clash between the bottom two in Pool B, Russia and Croatia. Both were winless going into the meeting and Croatia remained so after losing 3-0. Earlier in the day, Azerbaijan moved clear at the top of Pool A with their third successive win, this time against Italy. Germany put on a great display to ease past the Netherlands, while there were also wins for Poland and Serbia.

Elsewhere, in hot and windy conditions, Dutch cyclist Ellen Van Dijk won gold in the women's individual time trial at Bilgah Beach yesterday, finishing first in a time of 32:26.87 ahead of Ukraine's Ganna Solovei and fellow Dutchwoman Annemiek Van Vleuten. Italy's women won European Games Archery golds yesterday, beating the Belarus team 5-3. Ukraine took the bronze as they edged out Russia in the third-place play-off. Swiss pair Nina Betschart and Nicole Eiholzer marched into the round of 16 as the group stage of the women's Beach Volleyball tournament came to a close.