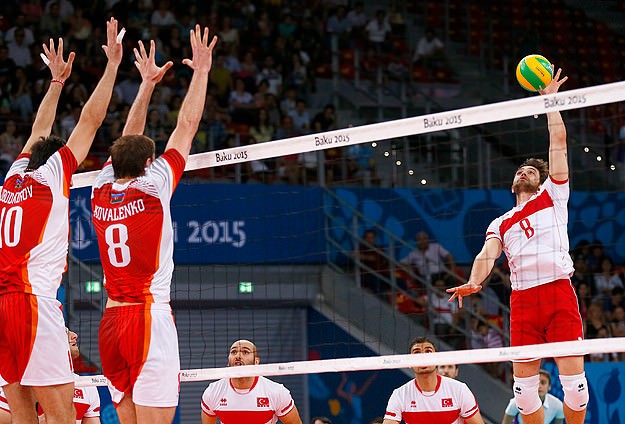 by Daily Sabah with Agencies Jun 23, 2015 12:00 am
Turkey edged out Azerbaijan in a five-set men's volleyball thriller in the penultimate pool game on Monday night in the Baku 2015 European Games. The Azerbaijanis put in a spirited performance and were cheered on loudly, but the quality of Turkey eventually proved too much as Turkey raced into a two-set lead (25-18, 25-17) before a series of errors allowed Azerbaijan back into the game, winning the third set 25-22 and the fourth 25-21.

Both teams squandered match points in the fifth before Turkey finally triumphed 20-18. The two teams linked arms to salute the crowd side-by-side following the game. The win sealed Turkey's third place finish in Pool A. Poland topped the pool ahead of France, with Serbia taking the fourth qualifying place.

The draw for the men's volleyball quarter-finals took place yesterday morning. Teams that finished in first and fourth positions in each pool already had their opponents determined as per competition rules. All the matches will be played on today: Poland v Slovakia (13:00), Turkey v Bulgaria (15:00), Serbia v Germany (19:00), France v Russia (21:00). The winner of Poland v Slovakia will play the winner of Turkey v Bulgaria.

The winner of Serbia v Germany will play the winner of France v Russia. The semi-finals will take place on Friday. In the evening's last game, Russia recorded their fourth win of the competition to lock up second place in Pool B. They easily swept aside the Italians 25-17, 25-15 and 32-30 to advance to the quarter-finals. Germany won Pool B with Bulgaria and Slovakia finishing third and fourth.

It was an especially disappointing tournament for Italy, who return home without winning one of their five games.

Elsewhere, Muhammed Ünlü of Turkey edged out David Alaverdian of Israel in the Men's Boxing Light Flyweight (46-49kg) quarter-final on Monday at the Crystal Hall in Baku. Ünlü will challenge Russian Bator Sagaluev today in the semi-finals.

British superheavyweight (+91kg ) Joe Joyce is a man in a hurry to win a gold medal after recording his second successive first round victory.

He took just 2 minutes 17 seconds to beat Lithuanian Mantas Valavicius in his quarter-final bout - even quicker than his previous victory over Alexei Zavatin of Moldova, which took 2 minutes 58 seconds.

So in just over five minutes, the British giant is guaranteed at least a medal as he lines up a semi-final clash with Frenchman Tony Yoka, who was an impressive quarter-final winner against Ireland's Dean Gardiner.

Russia and Belarus proved themselves to be the dominant forces in Sambo, as they won seven of the eight golds on offer and filled the top two places in the medals table, way ahead of every other country. The other gold medal went to Serbia's Ivana Jandric.

Slovakia took team gold in the athletics at the Olympic Stadium in Baku on Monday, beating Austria in dramatic style by just 0.5 points to go up as champions from the Third League of the European Athletics Team Championships.

A dropped baton in the final event of the two-day contest cost Austria victory as Slovakia's 4x400m relay men stormed home in first place to take their final total to 458.5 as the Austrians trailed home sixth, too slow to hang on to first spot.

Austria lodged a protest over the final results, but it was rejected and Slovakia was confirmed as the gold medalist.